Honor Note 10 will have stereo speakers

Huawei’s subsidiary Honor will be launching Note 10 in Beijing, China on July 31. Recently, the smartphone was teased by the company to feature a 5000 mAh battery. Now the company has revealed that will feature stereo speakers as well.

Honor has shared a teaser posteron Weibo, a microbloggingwebsite,about the development. The poster shows a block of melting ice with two speakers inside. This hints that the Honor Note 10 might be equipped with stereo speakers.

The Honor Note 10 will be the successor of the Honor Note 8, which was launched in 2016. It, however, did not come with a stereo speaker feature. 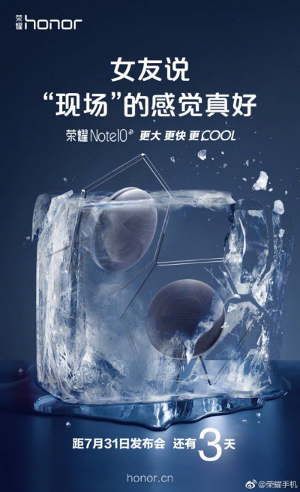 Meanwhile, the Honor Note 10 is now also available for pre-order on Huawei’s Vmall online store in China . To pre-order, one has to make a downpayment of 99 Yuan which is approx. Rs 995 and those who pre-order will get a free pair of wired earphones as well. On the store, two variants of the Note 10 are available – 6GB RAM with 64GB internal storage and 6GB RAM with 128GB internal storage. Thepre-order page also shows that the phone will be available in two colour variants- Magic Night Black and Phantom Blue.

As per earlier leaks, the Honor Note 10 will feature a 6.95-inch Full HD+ AMOLED display (2220 x 1080 pixels) and an aspect ratio of 18:9:5. An octa-core processor that clocks at 2.4 GHzwill power the smartphone.It is said to come with 6GB/8GB of RAM and internal storage of 64GB/128GB/512GB storage variants. All the variants have a microSD card slot.

It will have a dual camera setup with 24-megapixel and 16-megapixel sensors at the rear. For the front, it will have a 13-megapixel for selfies and video calling. The Honor Note 10 will run on Android 8.1 Oreo operating system out of the box and will be backed up by 4900mAh battery. The phone measures 177 x 85 x 7.65mm and 230 grams.