Huawei’s sub-brand Honor is all set to launch its upcoming Honor Magic 2 smartphone this week at an event scheduled for October 31 in China. Now ahead of the launch, the Honor Magic 2 has been spotted on GeekBench and AnTuTu benchmarking websites with TNY-AL00 model number.

As per Geekbench listing of Honor Magic 2, the smartphone is powered by Kirin 980 1.8GHz octa-core processor. It will have 8GB of RAM and will run on Android 9 Pie operating system. In the single-core test the Magic 2 scored 3316 while for the multi-score test, it received 9534. 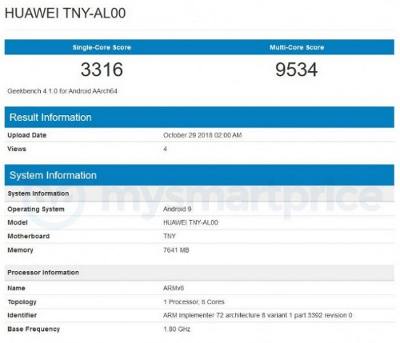 The AnTuTu listing has revealed that it features Full HD+ resolution supporting display (without screen size). It is powered by Kirin 980 chipset with 8GB of RAM and 128GB internal storage. The phone will come loaded with Android 9 Pie operating system. In the Antutu listing, the phone has scored an average benchmarking score 248,368.

TheHonor Magic 2 was earlier spotted on TENAA certification website in China. The Honor Magic 2 will feature 6.39-inch Full HD+ AMOLED display with 2340 × 1080 pixels resolution and 19.5:9 aspect ratio. It will feature the company’s own Hisilicon Kirin 980chipset coupled with 6GB/8GB RAM with 128GB/256GB storage without any microSD card slot.