Honor Band 5 up for pre-order, launching on July 23 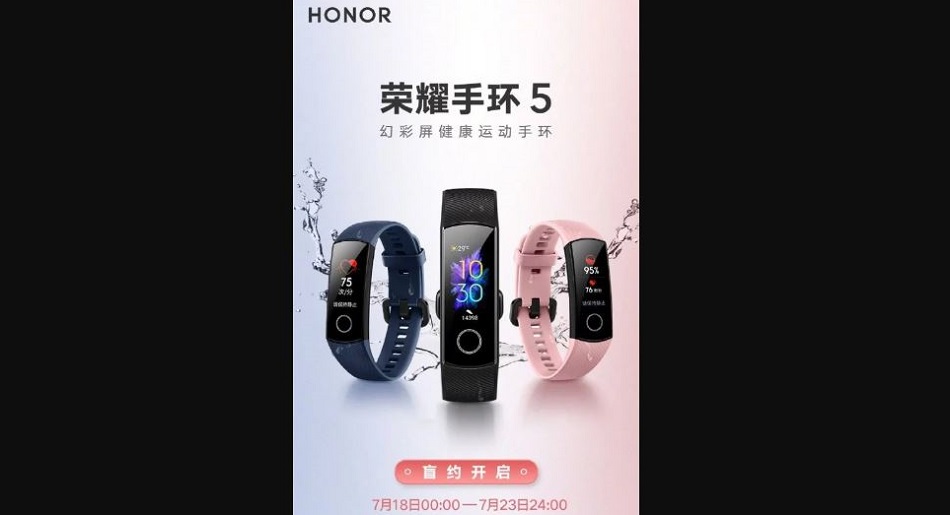 The Band 5 will most likely be released along with the Honor 9X and Honor 9X Pro smartphonesHonor Band 5 at an event scheduled for July 23rd.

The Band 5 will most likely be released along with the Honor 9X and Honor 9X Pro smartphones at an event scheduled for July 23rd.

As of now, the company has not revealed the specifications and pricing of the Upcoming Honor Band 5. However, as per earlier reports, the band 5 will have a coloured AMOLED display, can monitor blood oxygen levels, detect fatigue and listlessness, record poor sleep and even detect hypoxemia dizziness. Further, the device will also offer all the standard health band features like heart rate monitoring.

As far as the expected specification ofHonor 9X and Honor 9X Pro are concerned, will feature a 6.59-inch full-HD+ display with 1080 X 2340 pixel resolution. The phones will be powered by a 7nm octa-core Kirin 810 SoC with ARM Mali-G52 MP6 GPU. They are said to come in three variants – 4GB RAM + 64GB, 6GB RAM + 128GB, and 8GB RAM + 256GB storage that is further expandable up to 512GB via microSD card. The Honor 9X and Honor 9X Pro will run Android 9.0 Pie with EMUI 10 on top and will be backed up by 4000mAh battery with fast charging support. The Honor 9X is said to feature a 48-megapixel + 2-megapixel dual camera setup. The Pro will come with 48-megapixel + 8-megapixel + 2-megapixel triple camera system. For the front, the phones will be equipped with a 16-megapixel for selfies and both phones will have a pop-up selfie camera, which makes the screen completely bezel-less.Lastly, both of them will measure 163 x 77 x 8.6mm and weighs 190 grams.

Share
Facebook
Twitter
WhatsApp
ReddIt
Previous articleSamsung Galaxy A80 with 48MP rotating triple camera launched in India
Next articleIs the Redmi K20 overpriced or is it the premium you pay for a polished mid-range phone in India?
RELATED STORIES