Honor 8A to launch in China on January 8

The company has announced the launch on microblogging website Weibo via a teaser poster.

Huawei sub-brand Honor is all set to launch Honor 8A smartphone in China on January 8. The company has announced the launch on microblogging website Weibo via a teaser poster.

The teaser poster does not reveal any information related to the smartphone but it gives us a hint about the expected specifications of the Honor 8A. 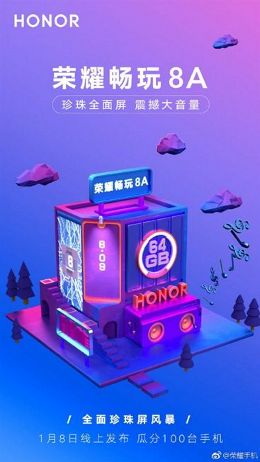 As per the poster, the Honor 8A will come with a 6.09-inch waterdrop notch display. It is said to come with an octa-core processor, which is likely to be the company’s Kirin 710 chipset. The phone will pack 64GB of internal storage. The poster also hints that the phone will come with dual speakers for impressive audio performance.

As per an earlier TENAA listing, the Honor 8A will have a 6.08-inch HD+ LCD display. The phone is said to be powered by a 2.2GHz octa-core processor. The phone will pack 3GB of RAM and will be available in two internal storage options - 32GB and 64GB, both of which can be expanded via a microSD card slot.