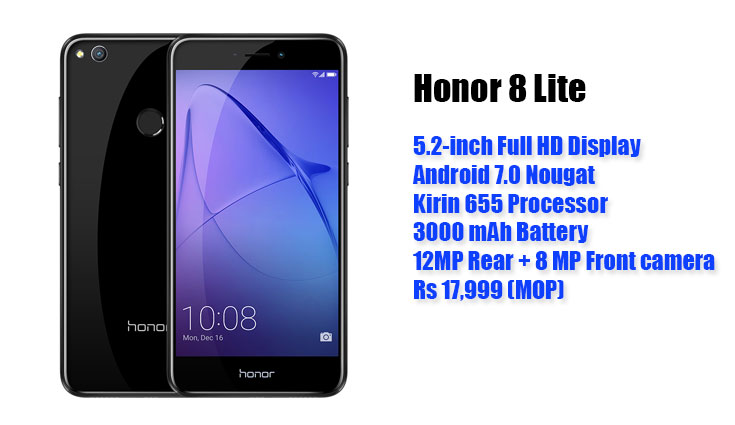 Note that Rs 17,999 is the MOP (Market Operating Price) and you might get the device for an even lower price from your nearby retail store

Honor 8 Lite, which was speculated to launch this week, has now been officially released by Huawei in India. The device has been priced at Rs 17,999 and will be available across all Honor partner stores pan-Indian starting 12th May. Note, unlike various other Honor devices and even Honor 8 which are available via both offline and online, Honor 8 Lite will be available only via bricks and mortar stores.

As far as specifications are concerned, the Honor 8 Lite features a 5.2 inch Full HD 2.5D curved glass display with a resolution of 1920 x 1080 pixels. It is powered by a (2.1 GHz + 1.7 GHz) Octa Core Huawei’s HiSilicon Kirin 655 processor, along with ARM Mali-T830 MP2 GPU. The smartphone comes with 4GB of RAM and 64GB of internal storage, which can be further expandable up to 128GB via microSD card.

At this price point, Honor 8 Lite goes head-to-head with Gionee A1, Vivo V5s and even Moto G5 Plus if you don’t mind buying the device online via Flipkart.