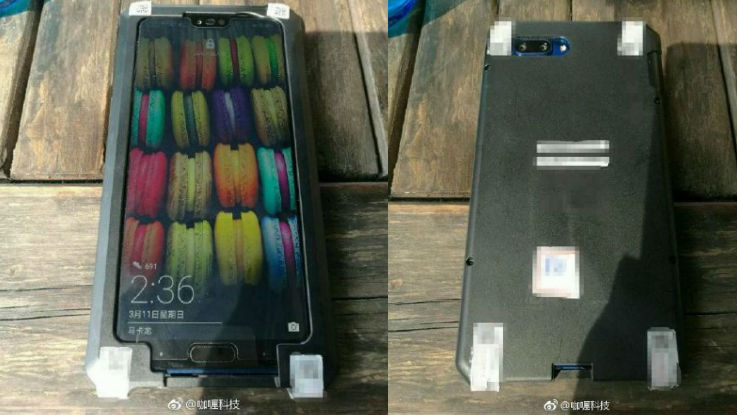 Honor is planning to launch another smartphone with the notched smartphone, named as Honor 10.

It seems more and more Android smartphones will sport an Apple iPhone X-like top notch this year, with Huawei being the prominent players. The brand recently announced the P20 series with notch design and it seems that its sub-brand Honor, is planning to launch another smartphone with the notched smartphone, named as Honor 10.

Some photos of the Honor 10 prototypes have been leaked on Chinese site Weibo. The leaked photos reveal that just like Huawei P20 and P20 Pro, the Honor 10 will feature a top notch. The notch will beat a front-facing camera along with proximity sensor and earpiece, while at the base, there will be a fingerprint sensor along with physical navigation buttons.

The smartphone will come loaded with a dual-camera setup along with a LED flash at the top-left position. Sadly, the back panel is not completely visible due to a protective cover. However, it is certain that the smartphone could come with a Blue colour option. The lock screen on the smartphone is similar to what we have seen in other Honor devices. That said, little is known about the upcoming smartphone. Also, there is no way to authenticate the images, so we suggest you take this report with a grain of salt.

Meanwhile, Honor has confirmed that it will be launching Honor 7A on April 2. Honor has sent the press invites for the launch event to be held on the said date. The invite also confirms the main dual camera setup, and it also hints at dual speakers and support for Face Unlock for the Honor 7A smartphone.

As per specs leaked by Slashleaks, the Honor 7A will be featuring a unibody metal design. It will sport a 5.7-inches with HD+ screen resolution of 720 x 1440 pixels powered by 1.4GHz Octa-Core Qualcomm Snapdragon 430 processor. The Honor 7A is expected to come in Black, Blue and Gold colours.