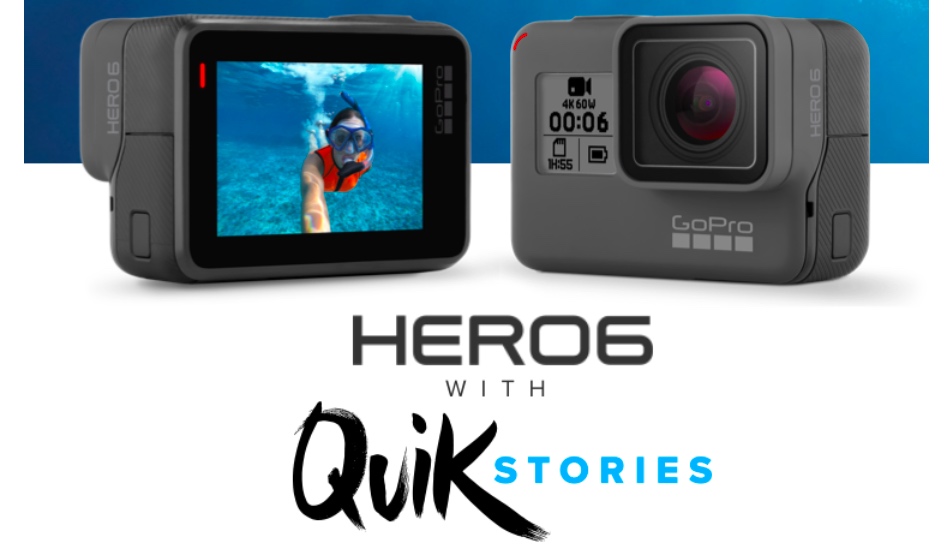 The HERO6 Black, the waterproof (up to 33 ft) camera comes with 2-inch Touch Display with touch zoom feature and is also compatible with existing GoPro mounts and Karma drone.

GoPro launched its HERO6 Black action camera in India. The action camera is now available for purchase via company’s official website and comes with a price tag of Rs 45,000.

The action camera captures 4K videos at 60fps and 1080p videos at 240fps. It also features the most advanced video stabilisation iMen a GoPro, claimed by the company.The HERO6 Black is waterproof with up to 33 ft and comes with 2-inch touch display with touch zoom feature. The device is also compatible with existing GoPro mounts and Karma drone. The action camera is powered by GoPro’s custom-designed GP1 processor, which improves dynamic Range and low-light performance. The HERO 6 comes with three times faster offload speed via 5GHz WiFi along with RAW and HDR photo mode.

Meanwhile, the brand has announced GoPro Fusion, a spherical action camera has the ability to capture 5.2K spherical content. Priced at $699 (Rs 45,770) on GoPro website for the US, Canada, Britain and Europe.

The Fusion features an 18-megapixel camera lens, which captures Time-lapse video, photo, night lapse and burst modes. The camera is waterproof up to 16ft and is compatible with GoPro app available on Apple App Store and Google Play Store. The camera includes Fusion grip mounts and also works with existing GoPro mounts. Along with this, it comes with Voice Control with support for 10 languages, accelerometer, gyroscope, compass and GPS functionality.