We now have the press renders of the Pixel 4 and 4 XL in black, white and orange colours, full specifications of the smartphones.

On October 15, Google will unveil the Pixel 4 series smartphone in New York. Last week, we got a few hands-on pictures through a leak as well as a set of apps, themes and wallpapers to launch with the next pure Android phone. In a streak of other leaked, we now have the press renders of the Pixel 4 and 4 XL in black, white and orange colours, full specifications of the smartphones and the possibility of a successor to the Pixel Buds.

Notable tipster Evan Blass posted press images of the Pixel 4 series in black and white. It’s believed that the full black model is the standard Pixel 4 while the one with a white back panel is the Pixel 4 XL. The displays on both phones show the launch date of the Pixel 4 which is October 15. The wallpaper also shows the text “P4” in abstract which could translate to the Pixel 4. 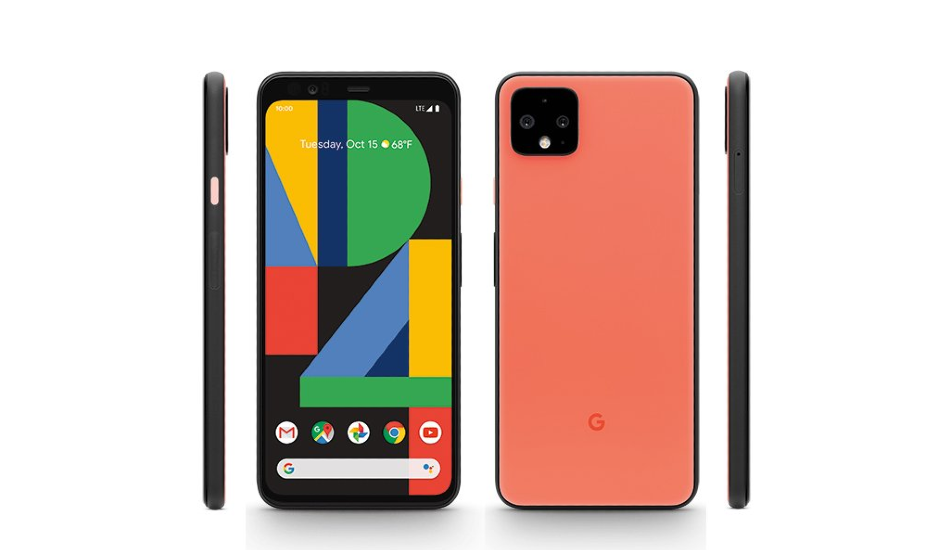 Blass also shared a render of the Pixel 4 XL in "Oh So Orange" colour. Like the Clearly White model, the Oh So Orange also appears to come with an orange coloured power button.

Two weeks ahead of the launch event, 9to5Google has now uncovered the full specs of the Pixel 4 and Pixel 4 XL. The Pixel 4 will feature a 5.7-inch Full HD+ Smooth 90Hz Display with Ambient EQ while the Pixel 4 XL comes with a 6.3-inch Quad HD+ Smooth 90Hz display and Ambient EQ. Both phones are powered by Qualcomm Snapdragon 855 chipset with Pixel Neural Core technology, 6GB of RAM and 64/128GB of storage. 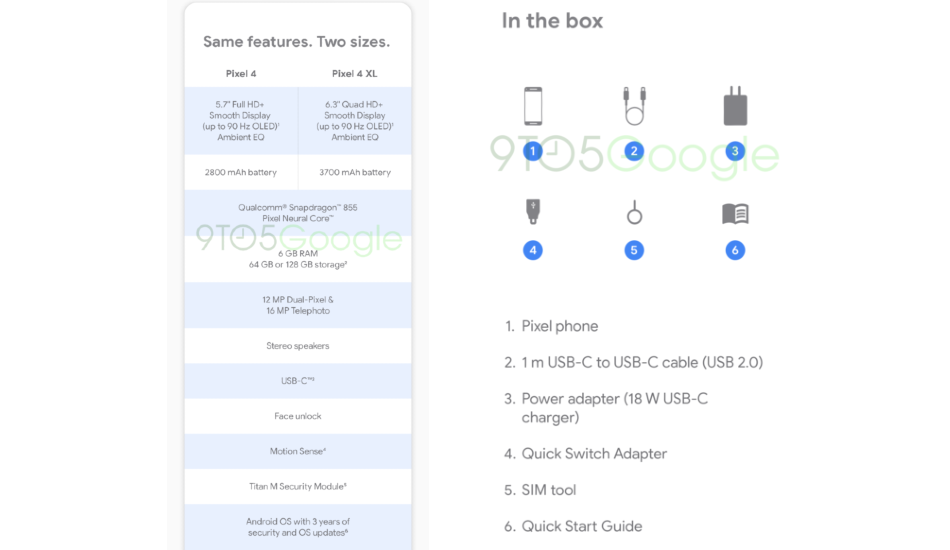 The Pixel 4 and Pixel 4 XL will come with dual cameras at the back with a 12MP Dual-Pixel sensor and a 16MP telephoto camera. The phone comes with a Titan M Security Module, motion sense, Face Unlock and storer speakers. To follow its tradition, Google will offer up to 3 years of security and OS updates to both phones.

Pixel 4 and 4 XL will feature 2800mAh and 3700mAh batteries with an 18W USB-C power adapter. The retail box will come with a 1m USB-C to USB-C cable, Quick Switch Adapter (female USB-A to male USB-C), a SIM tool, and a Quick Start guide. There won’t be any USB-C headphone adapter or the USB-C earbuds to be bundled with the phone. 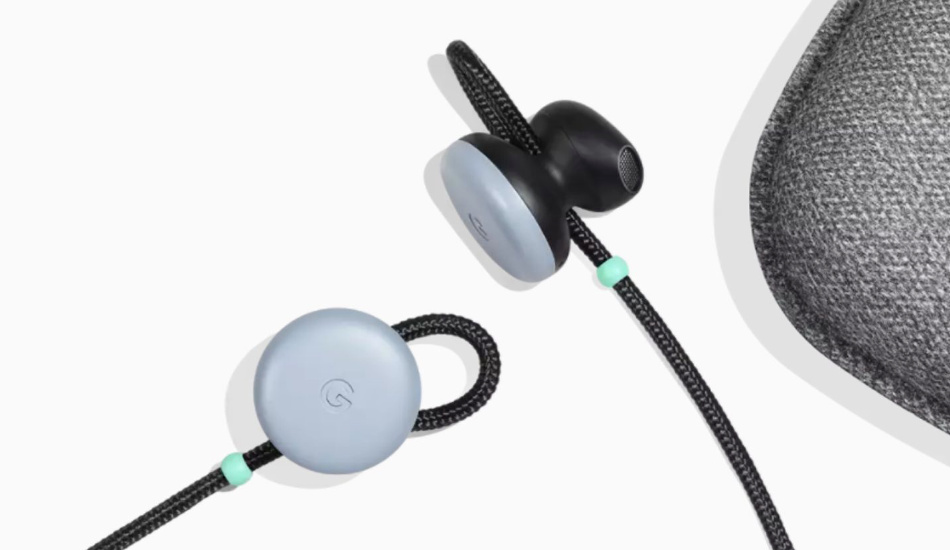 Speaking of earbuds, Google is also expected to launch the Pixel Buds 2 earbuds during the Made by Google 2019 event later this month, according to a source familiar with the plan who spoke to 9to5Google. The earbuds will be a successor to the two-year-old Pixel buds which launched with Pixel 2 series phones.

9to5Google has also shared some camera samples of the Pixel 4 across different scenarios. The camera samples show that Night Sight on the Pixel 4 has improved with better colour accuracy and dynamic range. Portrait selfies are smaller in size but offer more details and edge detection around the hair. The samples also include silhouettes, macro photos, shots of food and action shot. 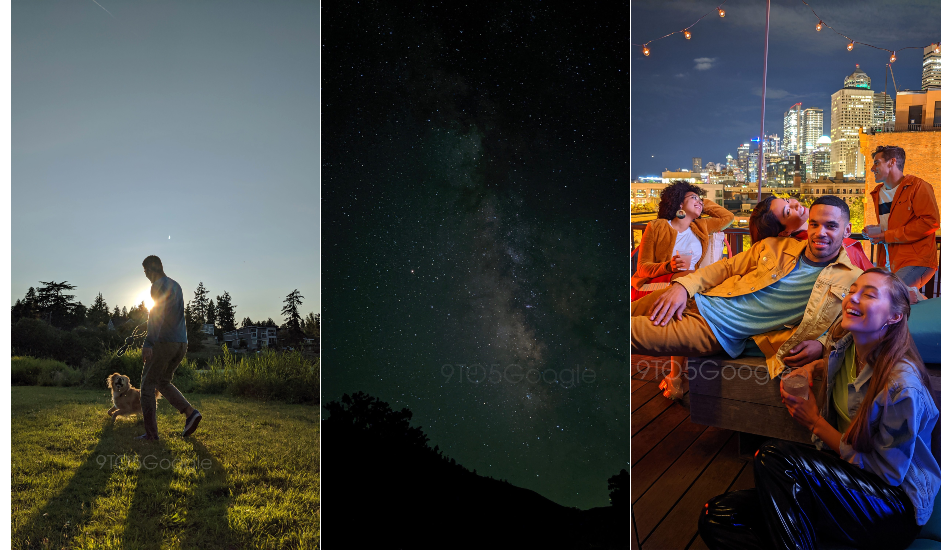 Besides an improvement in Night Sight, the Pixel 4 is now also touted to be capable of taking shots of stars at night. There are some changes to the camera app including a new Dual Exposure Camera Control for taking shots across different lighting conditions. Sliders will allow users to darken the picture to get sharp silhouettes. 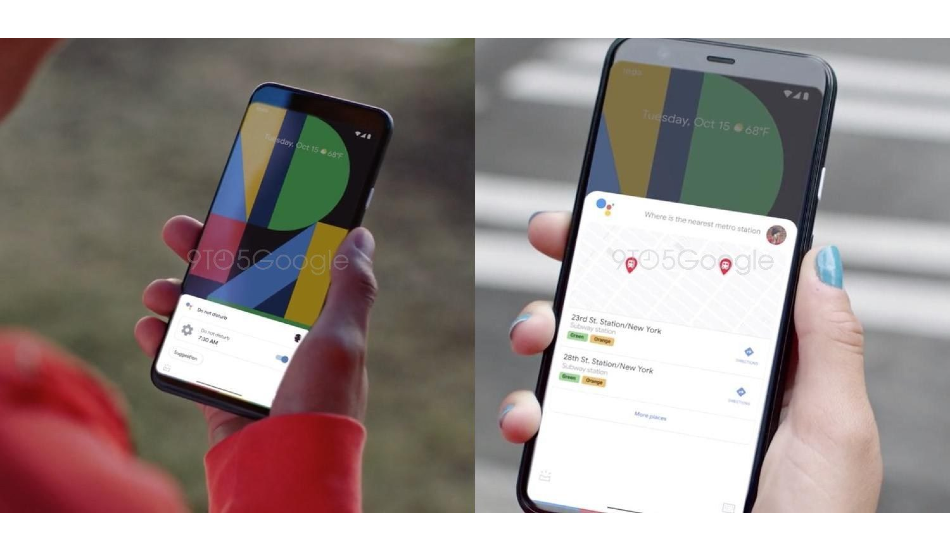 A promo of the new Google Assistant has also leaked online showing new features and animations for the voice assistant. Upon triggering the Google Assistant, a free light will fill the bottom of the phones to reveal that the Assistant is in action. More colours will pop up and move to show that the phone is listening to your input. The Assistant no longer takes up the whole screen and offers the potential of multitasking and controlling apps. 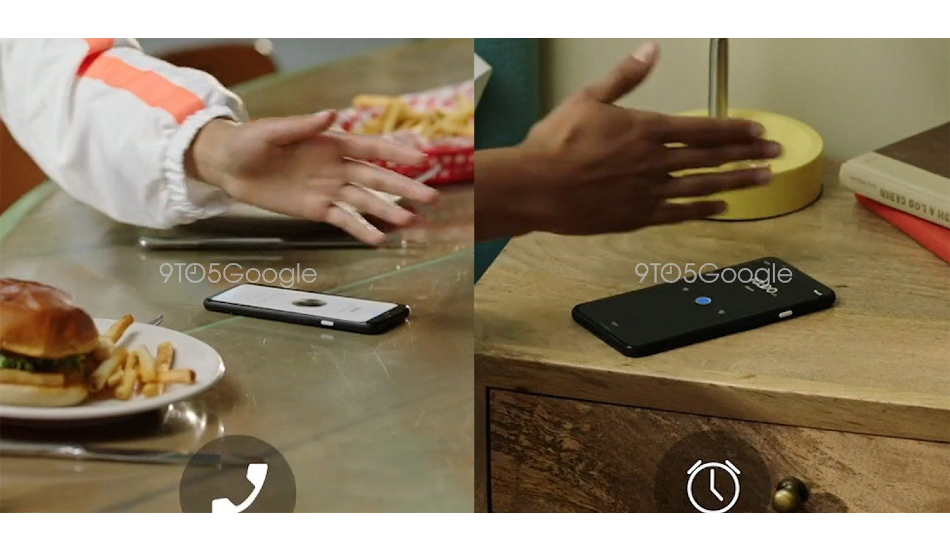 There’s also a new promo video of Motion Sense gestures on the Pixel 4. The feature can be used to since alarms, skips tracks and mute phone calls by swiping on the phone in the air. A list of regions to support Motion sense first are listed here. 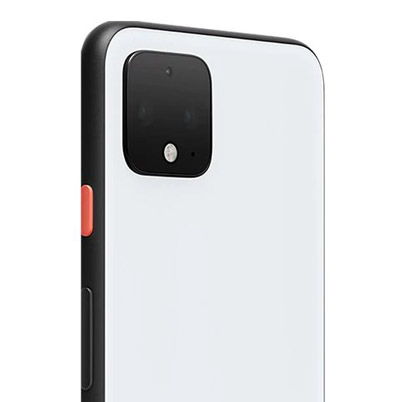 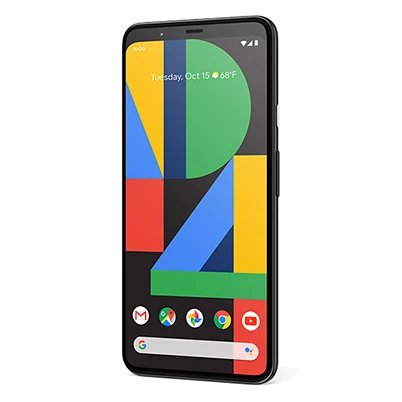 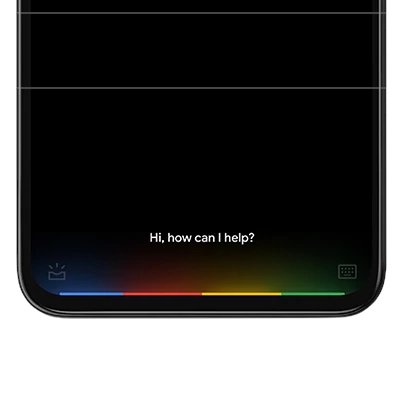 More images have now been shared by XDA's Max Weinbach. While one of the images show the new Google Assistant, the other two show the design language of the phones. The White variant can now be affirmed to include an orange-accented power button.