Google app for Android and iOS finally gets dark mode 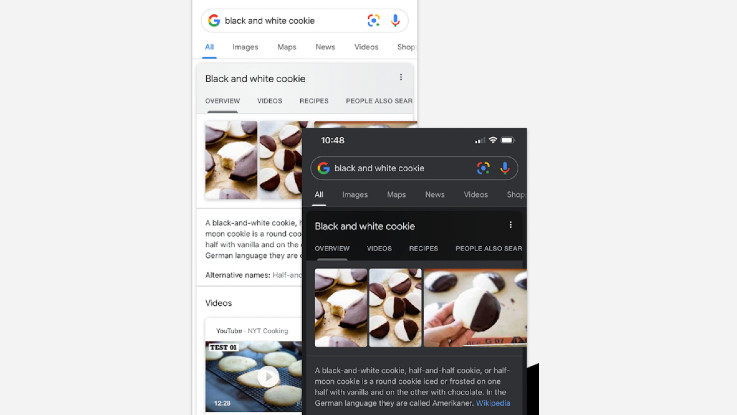 The new feature is now available on both Android and iOS platforms.

Google has finally started rolling out the dark mode to its Google application. The new feature is now available on both Android and iOS platforms.

Google revealed this information on its official Twitter handle. The tweet reads, “Starting today & fully rolling out this week, dark mode is now available for the Google App on Android 10 and iOS 12/13.” The company has revealed that the dark mode will reflect the device’s system settings in Android 10 and iOS 13. This means that if you chosen dark theme on your smartphone, the Google app will be shown in dark theme and vice versa.

Furthermore, one can also toggle between the light and dark mode inside the Google App settings. When the roll out will be available for your device, you will see a notification saying Dark Theme is available. Once click on it, you will be taken to the Settings from where you can change the preferences from Light, Dark or System Default.

Meanwhile, the company introduced new intuitive privacy and security controls for Google Chrome. The brand has revealed that it has made easy to understand controls for its settings. The company says that it is easier to manage cookies and one can choose if and how cookies are used by the websites. One can also block third-party cookies in regular and Incognito mode. One can also block all cookies on some or all websites.

The company reorganised the In site settings with two sections, which makes it easier to find the most sensitive website permissions including access to location, camera or microphone and notifications. Furthermore, at the top of Chrome Settings, users will see You and Google where they can find sync controls and it has also moved Clear Browsing data to the top of the Privacy and Security section.