Gionee is all set to reveal as many as 8 bezel-less smartphones on the 26th of November. The Gionee S11 is also expected to launch on November 26 when the company is hosting an event. Recently some live images of Gionee S11 were leaked online and now the smartphone has been spotted on AnTuTu website as well confirming the earlier specifications, as per a report of Techmsd. Earlier, the smartphone was also spotted on spotted on TENNA certification and GFXBenchmarking websites. 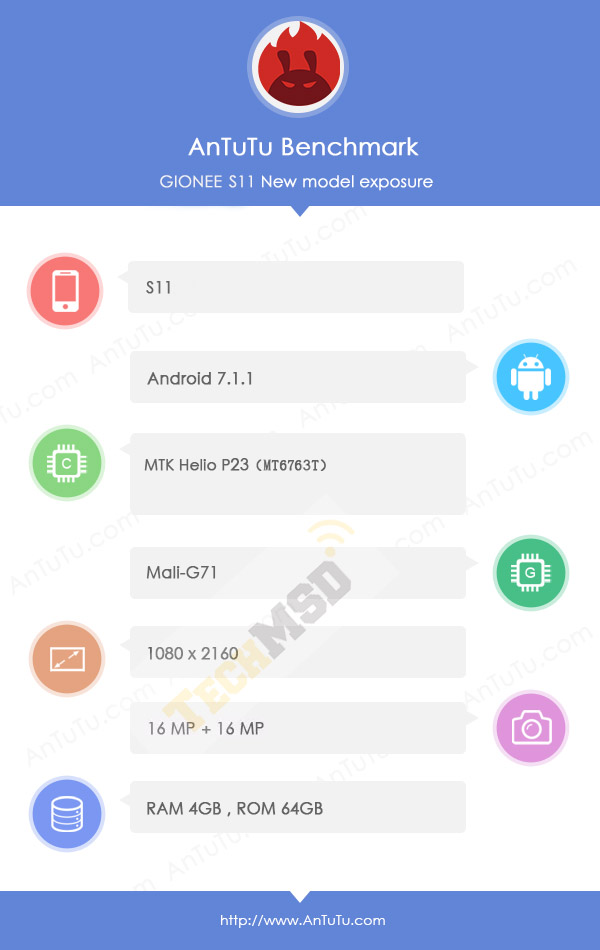 As per AnTuTu listing, Gionee S11 features a full HD+ display with a resolution of 2160 x 1080 pixels and is powered by a Helio P23 64-bit octa-core processor MediaTek, along with Mali G71 GPU. Further, as per listing, the smartphone comes with 4GB of RAM and 64GB of internal storage. The smartphone runs on Android 7.1.1 Nougat operating system. The listing has no information about its battery size. On the camera front, it has a 16-megapixel rear camera while for the front, the device will have the same 16-megapixel camera.

To recall, the TENAA listing revealed that the Gionee S11 features a 6.01-inch full HD+ display that has 2160 x 1080 pixels resolution with an aspect ratio of 18:9 similar which is same as seen on the recently launched Gionee M7 smartphone which features a 6.01 inch FHD+ AMOLED display. It is powered by a 2.5 GHz octa-core processor with an unknown chipset which is coupled with 6GB RAM. The earlier GFXBench listing revealed that the smartphone will be powered by a MediaTek MT6763 with ARM Mali-G71 GPU.

It offers 64GB of internal storage, 128 GB expandable storage via a micro SD card, dual rear camera setup of a 16-megapixel rear camera with LED flash and an 8-megapixel front-facing camera. For the selfies, there are 20-megapixel and 8-megapixel snappers on the device’s front side, so the phone will actually ship with four cameras. There is also a fingerprint sensor which is mounted at the back of the device. The hybrid dual SIM phone runs on Android 7.1.1 (Nougat) with Amigo OS 5.0 and is fueled by 3600 mAh battery.