Flipkart Big Billion Days 2021 sale is all set to begin 7th October and will last till 12th October. It will bring new launches, big discounts, and more. 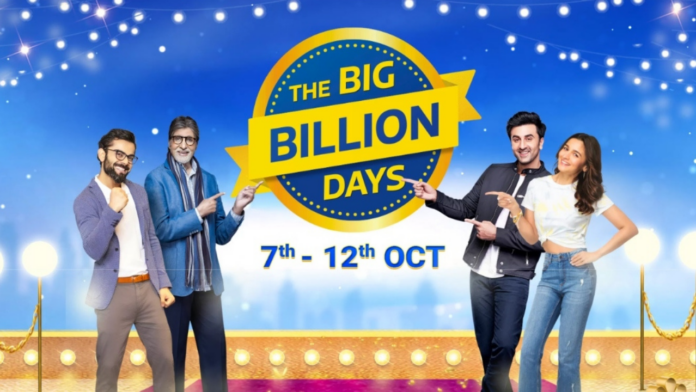 Flipkart has finally announced the dates for its annual Big Billion Days 2021 sale, which will begin from October 7th and last until October 12th. The sale will bring a bunch of discounts on all types of products, including electronics, home appliances, and more.

This will be the eighth edition of the Big Billion Days sale held by Flipkart every year. Flipkart Plus members will get access to the sale early than non-Plus users. Non-Plus users will also get the chance to join the sale early by redeeming 50 SuperCoins on the Flipkart app.

Smartphone companies including Oppo, Poco, Motorola, Realme, Samsung, and Vivo are also launching their new smartphone models that will be available during the Flipkart sale. In addition, other new products, including the Moto Tab 8, Motorola Edge 20 Pro, and Realme 4K Google TV Stick are also set to debut during the sale period.

Other discounts include up to 50% off on laptops, up to 70% off on TWS earbuds, and up to 80% discount on products offered by Flipkart brands including Smartbuy and Marq. Flipkart should be revealing more deals during the upcoming days.

For now, some of the deals that look worth exploring include In Note 1, which should start from Rs 9,499, Moto G60 from Rs 15,999, Moto Edge 20 Fusion from Rs 19,999 and more. However, it is unclear whether these prices will be available with a Bank Card discount or will be a flat cut from the original price of the products.

The nearest launch we have on Flipkart is of the Narzo 50 series by Realme. The series will be made official at 12:30 pm on September 24th. Alongside this series, Realme Band 2 and Realme Smart TV Neo India will also launch on the said date. The Narzo 50A should have Helio G85 SoC.