This is the preliminary account of our interaction with the freshly rolled out Apple iOS 5.0 update for iPhone, iPod Touch and iPad

Apple has starting rolling out the heavily anticipated iOS 5.0 update from October 12 mid-night in India and like millions others we were haggling to get it on our devices.

After downloading the update, and applying the iOS 5.0 on the iPod Touch, it was sheer bliss to interact with the device. The first boot up, post iOS 5.0 update, welcomes the users with certain settings to be set by the user such as Language, Region, Location services option, WiFi, and finally the diagnostics sharing.

After applying the iOS 5.0 on the fourth generation iPod Touch, we spent couple of hours to see some of the obvious changes in the user experience. The new iOS 5.0 brings several features to the table like new iMessage instant messaging app service, Notification Center, Twitter integration, camera improvements, iCloud sync, iTunes sync over WiFi and several other features under the hood. Do take a look at the list of major features offered with the iOS 5.0 over here.

As this is the first look, the following will be totally honest account of personal usage experience with the iOS 5 update.

Apple has replaced the box-y rectangular toggle switches with the slim switches that are more rounded at the end. That is one of the cosmetic changes one could find in Settings App.

Lockscreen also becomes more useful since it is now capable of showing the alerts and swiping on them will take you to respective app. However, in order to clear the alerts on the home screen, one has to unlock the lockscreen, open the notification center and then clear them.

Comprehensive notifications settings certainly offer flexibility to receive alerts and update in a way the person finds most suitable.

The new iMessaging system starts off by registering yourself with your Apple ID credentials and pulling your list of contacts that also possess iMessage capable device. Just like BlackBerry Messenger, even the iMessage chats are encrypted and seamless across different devices. That means you can carry the conversion from where you left even if you have changed the device. Also Delivery and Read receipts are supported so that one can always keep a tab on what happened at the recipient’s end.

If you are using the Messages app to send a message to non-iMessage app user, then that user’s contact name in “To” field would appear in Green Bubble. Similarly, if the recipient has the iMessage app then the contact name in “To” field would appear with blue bubble. Sharing images and video over iMessage chat is certainly fun with the bubble-style threaded chat interface.

Location Services if enabled while setting up, the iOS device for first time tends to eat up quite a lot of battery and also slows down the performance of the device.

Our iPod Touch slowed down considerably and the app or options took good 3-5 seconds to show up. However, after the Location services were disabled, the iPod Touch worked smooth. By default, the Location Services if enabled stays on for several native iOS apps such as Weather, Maps, Camera and even fetches location based iAds. 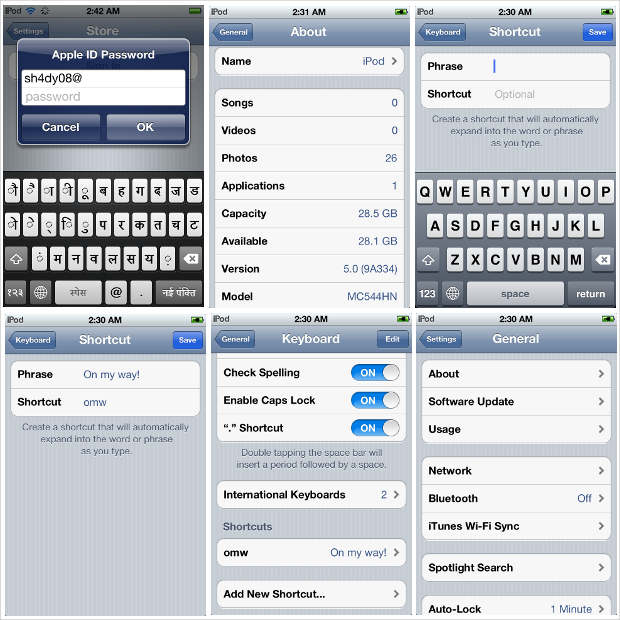 While setting up the iOS device, if you have chosen India as your location, the keyboard will offer Hindi keyboard by default for input. All you have to do is tap on the Globe button on the keyboard to activate the Hindi keyboard. Also one can now choose the Emoji Keyboard for adding emoticons while chatting. The auto correction accuracy has been improved phenomenally.

Most novel part in input is the new Shortcuts. In this, booming Internet and instant messaging era, Apple offers Shortcuts to expand the expressions. Like the OMG will expand to Oh My God and TTYL expanding to Talk to You Later. Once again, this feature has been inspired by the TextExpander app in the Cydia store and is quite a helpful feature for those chatterboxes who love to use acronyms for pretty much everything. 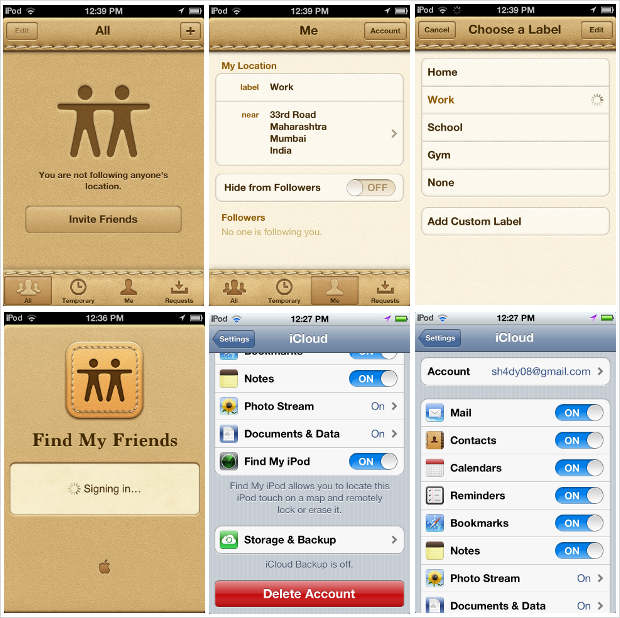 The iOS 5 also brings built-in dictionary which is quite handy. For instance, if you select a word anywhere on the webpage or in email by holding on it to bring the Cut-Copy-Paste pop-up menu then a new option Define shows up. That option leads to the dictionary which shows meaning and nature of the selected word.

The mobile version of the Safari web browser has now the famous Reader option that strips down a particular text heavy page to present it in a more readable manner. For instance, you can read an entire article or review without getting distracted by other columns or features on that website.

The Reader button appears in the address bar of Safari when accessing a text heavy page. However, the Reader option doesn’t include other features of the page like comments. 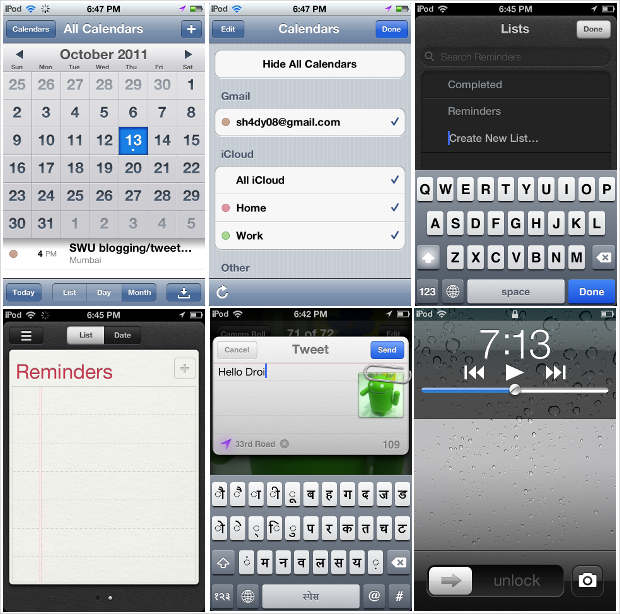 The new iCloud service offers up to 5 GB storage in Apple’s cloud servers where one can store data that includes mail, contacts, calendar, reminders, bookmarks, notes, documents and photos. The iCloud backup kept on giving failure error while trying to turn on iCloud Backup. Reasons for the failure weren’t known so we gave up after multiple tries. Apparently one is required to plug the device to the computer, sync it with iTunes and choose ‘Back up to iCloud’ from the Summary tab of the iOS device in iTunes.

The iOS 5 also brings yet another most awaited feature – the iTunes WiFi Sync that allows syncing data and multimedia between the iOS device and a computer wirelessly. Both device and the computer need to be connected via WiFi and then sync all the data wirelessly. That totally takes of the burden of connecting the device to PC or Mac every time you wish to sync some music. 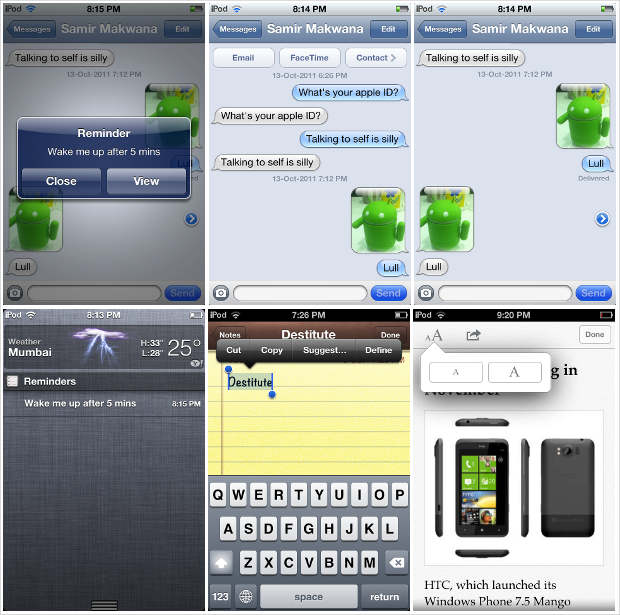 Double-pressing the home button while the screen is locked brings camera icon on the lockscreen and the users can directly open the camera app by tapping on that icon. Besides that, camera offers new grid view for those who wish to frame the subject properly and capture perfect photos. After capturing photos, one can immediately edit them by adjusting the brightness, removing the red-eye or cropping it.

Besides these obviously visible improvements, the iOS 5 has brought several other additions in different native apps like the mail, maps, photos and newsstand. Twitter lovers will totally enjoy the social network’s integration in the photos, map, notes and even Safari to share updates seamlessly wherever the ‘share’ feature is available.

Major improvements have been made for in the accessibilities area with custom element labeling, vibration patterns and numerous other options.

This was our account of first basic interaction with the iOS 5.0 running iPod Touch. Very small number of features is exclusive to respective devices such as iPhone and iPad.

Yesterday, the Apple servers were swamped with millions of request and now it is safe to download and install the iOS 5.0 on your iPhone, iPod Touch and iPad.