FAU-G ratings getting lower by the day. Are PUBG fans responsible?

FAU-G launched with a bang but now it seems like the game is having a hard time on play store with many people not liking it. Who is responsible?

FAU-G launched with a bang this Republic Day and managed to impress some of the population that was coming over from PUBG Mobile. The keyword here being 'some', the game failed to impress many of the people who were assuming the game to beat PUBG in every aspect.

While the game has repetitive gameplay as we saw in our review as well, many of the fans have the same complaints along with the game not being able to meet their expectations.

The Play Store rating for the game started off with a solid 4.2 stars on the day of launch and today, at the time of writing this story, the rating stands at 3.2 stars based on 4,95,531 reviewers. The feedback suggestion is filled with 1 star ratings, all pointing towards the impact which the game failed to make and most of reviews comparing the game with PUBG. What made the rating fall so low? Is it because of the PUBG fans? Or is FAU-G itself responsible? We would say both. 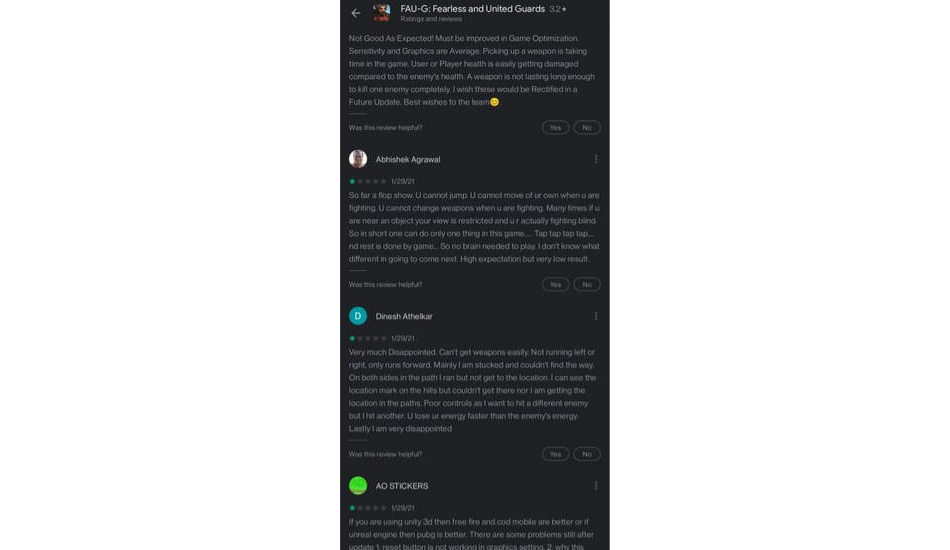 PUBG Mobile was one of the first battle royale games on smartphones that shook the world with its great graphics and gameplay. The game was so addictive that some countries even had to consider putting a ban on the game. When PUBG got banned back in September of 2020 over border tensions between China and India, and the latter being considered for the security of its citizens, the gamers started looking for alternatives.

Some alternatives such as Call Of Duty Mobile, Fortnite, and many more served well. Then came the FAU-G announcement, that raised the patriotic sentiment amongst the Indian gaming community as the game was 'Made in India' and was based on the hardships faced by our soldiers.

The hype for the game was real, and it came at a time when PUBG had just got banned. While PUBG had raised the bar for smartphone gaming and it set a new standard for the smartphone games, people started expecting the same from FAU-G.

The hype for the game that was created by the publishers itself got mixed with the high expectations of the gamers, which resulted in the game not delivering well up to the mark it was supposed to. That is why it hasn't been entirely the fault of FAU-G developers, but also the raised standards which PUBG set before it left India.

Adding to the overhype was the delayed launch of the game that further made users just forget about it altogether. Secondly, we can't blame nCore Games for not making the game similar to PUBG as they never conveyed that the game would launch in the battle royale segment.

The main fault of the FAU-G developers that should be considered is the gameplay. While the graphics of the game are still above average and look good while playing, the gameplay is not as engaging as it is on other games.

To conclude, it was a mixture of overhype, below average gameplay, and the high industry standards that the game couldn't meet because of which the ratings of the game have been falling since its launch.