Face off: Micromax Canvas Power A96 vs Motorola Moto G

We have compared the 8 GB version of the Moto G with the Canvas Power A96 considering that they are priced very close to each other.

Micromax last week announced an Android smartphone that comes with huge 4000 mAh battery. The phone, named as Micromax Canvas Power A96, is priced at Rs 9,990. Prior to that, Motorola re-entered the Indian market with its Moto G smartphone which comes in two versions – an 8 GB one priced at Rs 12,499 and a 16 GB version which costs Rs 13,999. Both 8 GB and 16 GB versions of Moto G have been hailed by many for its design and overall performance. 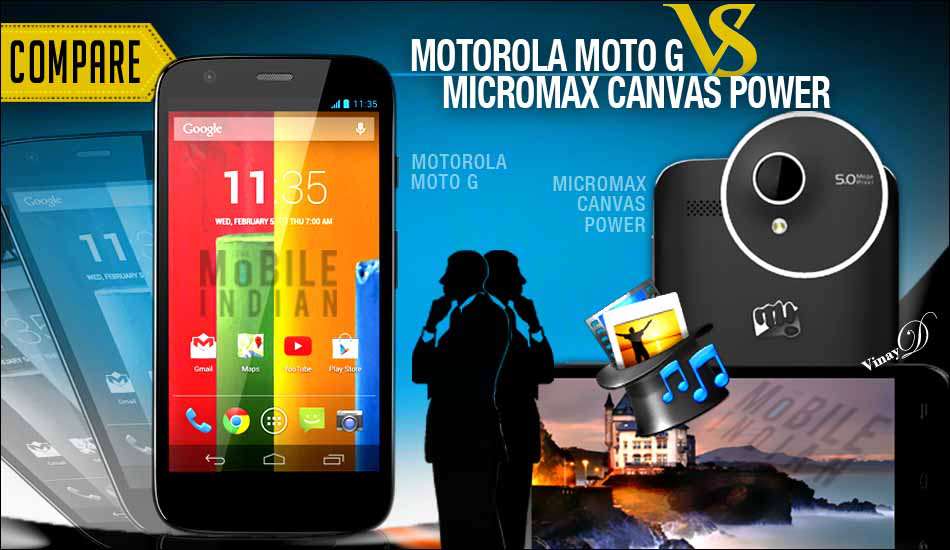 So here we have compared the 8 GB version of the Moto G with the Canvas Power A96 considering that they are priced very close to each other. Note that this compare is based on the specification of the handsets and their performance may differ in the real life situation.

The Moto G comes with a 4.5 inch display with 1280×720 pixels resolution, which means it has huge 329 ppi pixel density. It also comes with coloured back panels (hopefully it comes bundled with the phone). To be specific, the Moto G is 129.9 mm tall and 65.9 mm wide. Since it has a curvy body, it measures 11.6 mm thick at the middle while measuring 6 mm at the edges. 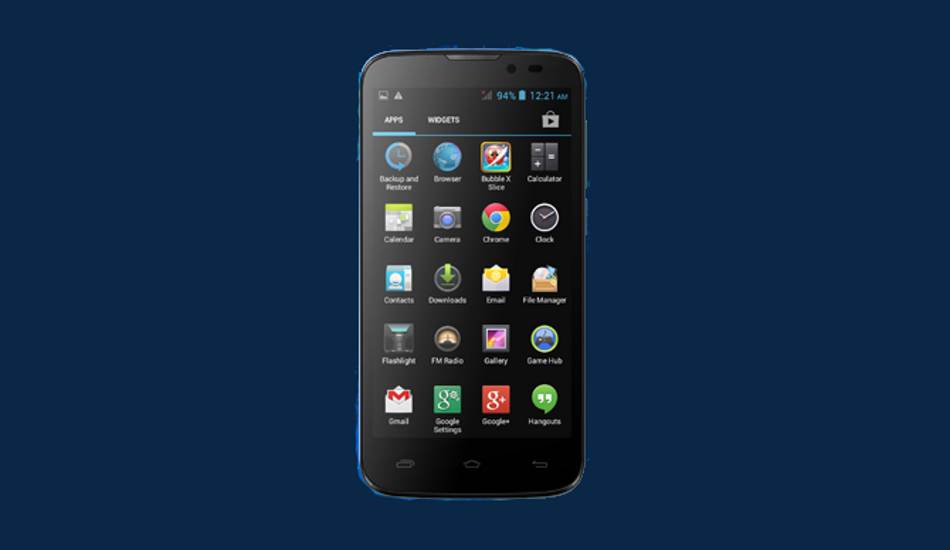 The exact dimensions of the Canvas Power has not been revealed by Micromax. Its 5 inch touchscreen display is also has only 480×854 pixels resolution. 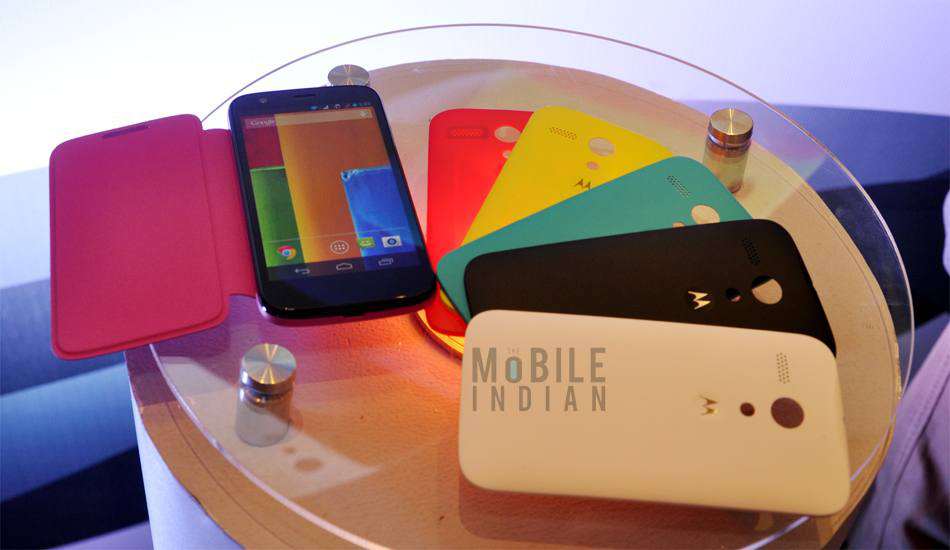 The Micromax Canvas Power has a 5 megapixel rear camera which too can capture high definition videos. However, it is not a auto focus unit. It, however, has a VGA front camera and an LED flash in the back panel.

The Motorola Moto G comes pre-loaded with Android 4.3 Jelly Bean operating system but the Android KitKat version has been released by the company for the handset. The phone is powered by the 1.2 GHz Qualcomm Snapdragon 400 quad core processor. To handle the graphics, there is Adreno 305 GPU in the Moto G.

On the other hand, the Micromax Canvas Power A96 has a 1.3 Ghz quad core Mediatek 6582M processor. There is a bit of confusion on the version of Android used in the phone as Micromax’s website has mentioned both Android 4.1 and 4.2 in the product page of Canvas Power but anyway we do not expect Micromax to release the KitKat version for it as Micromax is yet to release the same for its flagship devices. The product page also do not have any information about the GPU used in the Canvas Power.

The Moto G comes in 8 GB and 16 GB internal storage versions but here we have considered the 8 GB version which is close to the Canvas Power in terms of pricing. Note that Moto G has no expandable storage slot so obviously in this section, the Micromax Canvas Power looks good with its 4 GB ROM (1.44 GB for apps and 1.14 GB for users) and 32 GB expandable storage slot. 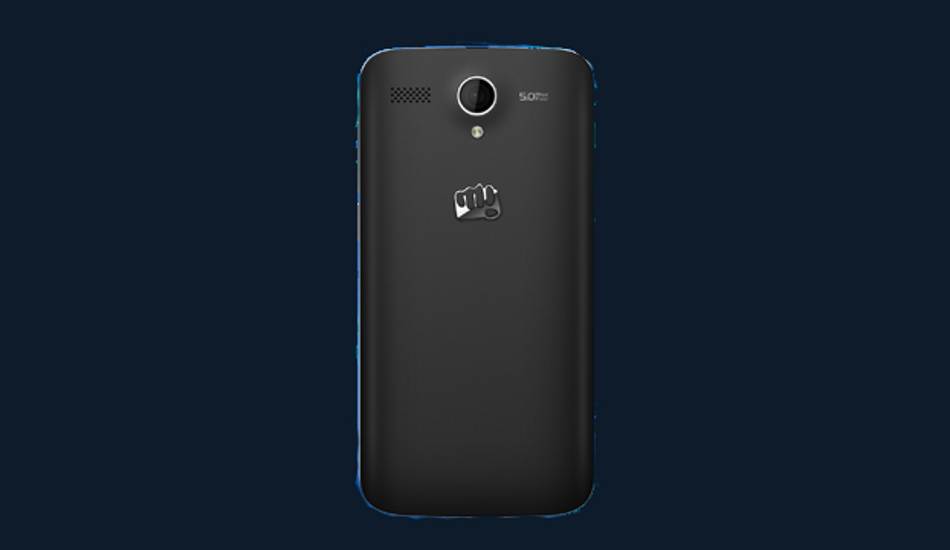 However, Moto G has 1 GB RAM against 512 MB of Canvas Power.

This is supposed to be the USP of the Micromax Canvas Power. It comes with a huge 4000 mAh which is even on the higher side for a 5 inch smartphone. Curiously though Micromax says it provides only 5.5 hours of talktime and 450 hours of standby which cannot be considered decent for any handset.

On the other hand, the Moto G’s average 2070 mAh Li-Ion battery claims to provide 24 hours of talktime on mixed usage.

I think there is some printed mistake on part of Micromax, else a usual 4000 mAh battery on a 5 inch smartphone should provide much more run time than what Micromax is saying on the Canvas Power’s product page.

The Motorola Moto G clearly has advantage over the Micromax Canvas Power in terms of display and processing power. Its camera department also looks much better than that of Canvas Power. However, the Micromax handset looks better in storage and probably has some advantage in the camera section which needs to be clarified by Micromax.

So if you are not bothered about spending Rs 3,000 more, than the Moto G looks a much better option.