Everything you want to know about Custom Royal Enfield Himalayan

The bike is not road legal and is limited to non-public roads only.

Royal Enfield has just unveiled an off-road version of its adventure bike the Royal Enfield Himalayan at the 2018 Bangkok Motor Show. The bike is called the Himalayan Off-Road Edition and has been kitted up to be a dirt track racing machine.The bike is not road legal and is limited to non-public roads only.

Royal Enfield’s Himalayan is one of the most versatile motorcycles in its segment due to its multi-purpose design. The company has replaced the headlamp and the visor unit with a flat body-coloured plastic shield. It misses out on a fuel tank guard, a front tyre hugger, chain guard, grab rail, the taillamp, and even the pillion seat. The saddle is now flatter and features dual tone finish under the rider seat.

It also gets a random sticker livery that promotes Royal Enfield’s expeditions and accessory brands. 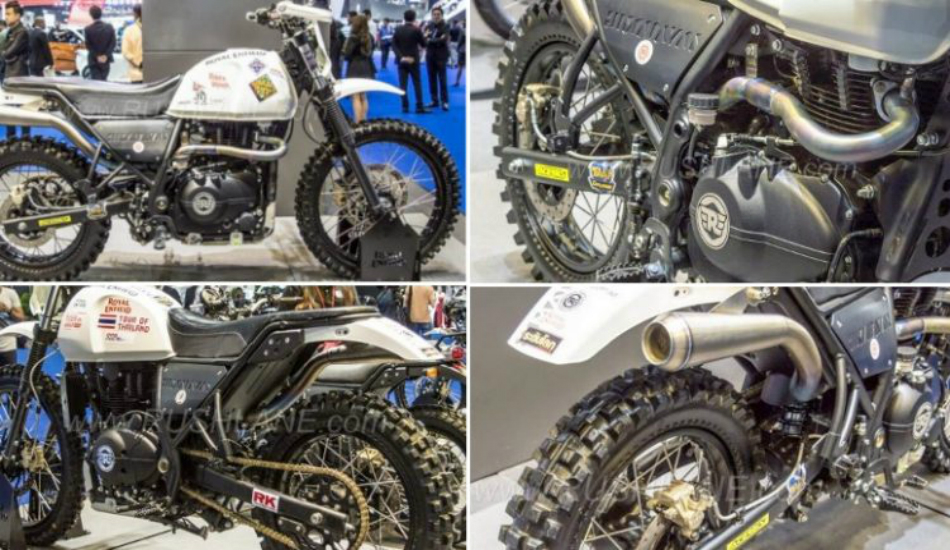 The big change is the new nearly flat handlebar which completely changes the ergonomics of the bike along with a new custom exhaust system which is an under-seat canister.This has been done to further enhance the water wading capabilities of the Himalayan. The motorcycle is also equipped with knobby tyres which handle dirt well. The handlebars also get knuckle protectors for added protection during dirt rides.

The cradle flame chassis is suspended by a 200mm telescopic front fork and a 180mm mono-shock. Both the tyres are compliant with dirt racing terrains and get disc brakes. The front gets a 300mm disc brake while the rear gets a 240mm disc brake.

Mechanically the bike remains the same. It is powered by a single cylinder, 411cc air-cooled fuel-injected engine that churns out 24.5 bhp and 32Nm of torque. This engine is mated to a 5-speed gearbox.The bike has become significantly lighter and thus has improved acceleration It also gets an upgraded chain and sprocket sets.

Along with India, Thailand is an important two-wheeler market for Royal Enfield.