Dizo seems to be gearing up to launch a new smartwatch called Dizo Watch D in India. 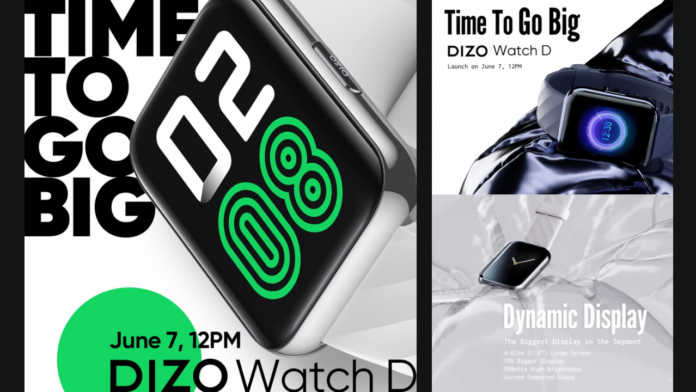 Realme TechLife sub-brand Dizo has launched a bunch of products in India since its inception and smartwatches seems to be one of the favourites of the company. Now, the company is gearing up to launch a new smartwatch in India this month, called the Dizo Watch D.

Dizo has shared on Twitter the teasers for the Dizo Watch D as per which, the watch will launch on June 7 in India at 12PM IST. The teasers also reveal some of the features of the upcoming smartwatch, including a 1.8-inch dynamic display with a curved screen and 550 nits of peak brightness.

Further, the Dizo Watch D will have a metal frame with silicone straps and will be water resistant up to 50m. The watch will have support for more than 150 watch faces and a customisable widget dashboard. Apart from this, the watch should also have the other usual features such as an heart rate monitor, blood oxygen monitor, activity tracker, etc, but nothing has been confirmed as of now.

Meanwhile, it recently launched the Wireless Dash Neo neckband earbuds which feature an 11.2m audio driver based on the Bass Boost+ algorithm. They also come with Bluetooth 5.2 to connect to devices, SBC audio codec.

For battery life, the company claims that the new Dizo Wireless Dash will come with 30 hours of music playback on a full charge. The earbuds also support fast charging via a USB-C port. It also has DIZO’s first Blink Charge feature, which helps the earphones give you 10 hours of music playback with just 10 mins of charge. It has a Kevlar texture design and comes with skin-friendly silicone band makes it comfortable to wear.