Corning has announced the Gorilla Glass Victus 2 which is being evaluated by multiple OEMs and is expected to arrive soon in markets. 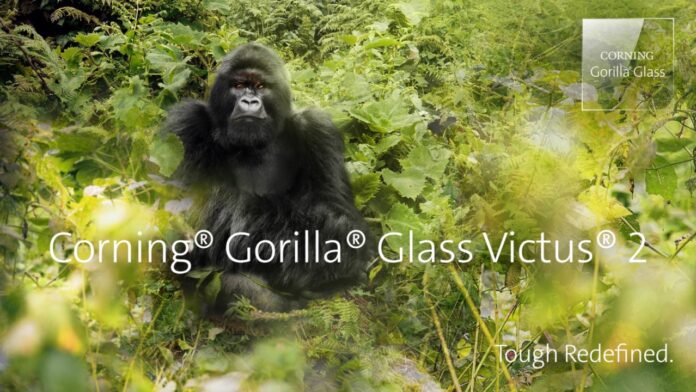 Corning Incorporated, the company behind Gorilla Glass has unveiled the next generation of its strongest lineup of glasses, Gorilla Glass Victus 2. With a new glass composition, Corning Gorilla Glass Victus 2 delivers improved drop performance on rough surfaces like concrete, the world’s most abundantly engineered material, while preserving the scratch resistance of Gorilla Glass Victus. Corning claims that Victus can survive 1-meter drops on concrete which is actually impressive.

Corning’s extensive research has shown that 84% of consumers across three of the largest smartphone markets – China, India, and the United States – cite durability as the number one purchasing consideration behind brand itself.

“Today’s smartphones are nearly 15% heavier, and screen sizes are up to 10% larger, than they were four years ago – increasing both the stress on the cover glass and the probability of damage. Gorilla Glass Victus 2 redefines tough for consumers and OEMs”, said David Velasquez, vice president and general manager, Gorilla Glass.

Read More: OnePlus Nord CE 3, Pixel 7a renders show what these phones could look like

In lab tests, the company claims that Gorilla Glass Victus 2 survived drops of up to one meter on a surface replicating concrete. Further, other aluminosilicate glasses from other manufacturers typically failed when dropped from half a meter or less.

In addition, Gorilla Glass Victus 2 continued to survive drops up to two meters on a surface replicating asphalt and maintained scratch resistance up to four times better than competitive aluminosilicate.

Gorilla Glass Victus 2 is currently being evaluated by multiple OEMs and is expected to arrive in markets within the next few months, confirmed the company.