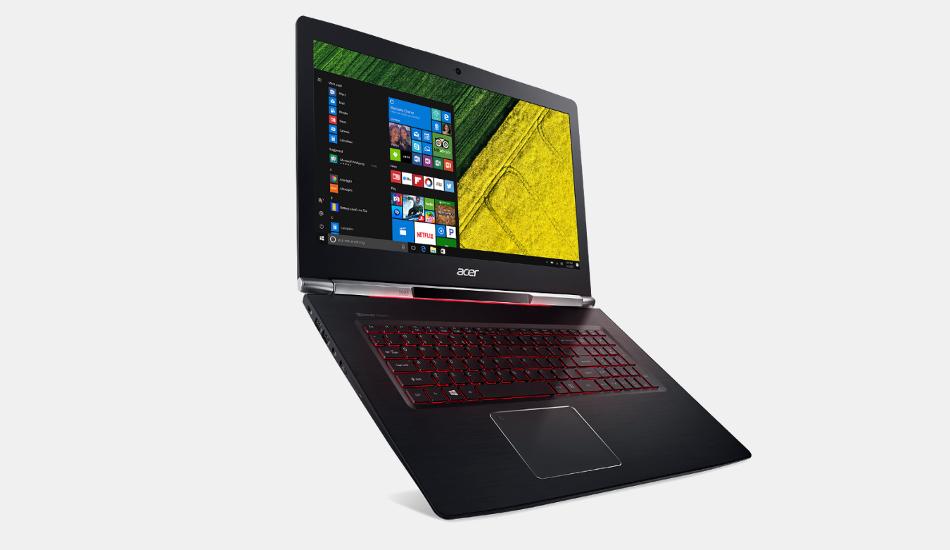 The Consumer Electronics Show (CES) 2017 has kickstarted and many manufacturers are showcasing their new product lineups. And joining this bandwagon is Acer. The company has, on Wednesday, announced a new Chromebook, three new Aspire series devices, including two new high-performance notebooks and a desktop PC at the world’s largest tech show.

Acer has announced a new Chromebook 11 N7 meant for students. The device comes with US MIL-STD 810G military grade standard, which can handle up to 60kgs of downward force on the top cover and reinforced cases and hinges result in greater resistance. The laptop can survive drops of up to 4 feet and comes with a spill-resistant keyboard that provides protection spills up to 330ml of water. On the hardware front, the Chromebook is powered by the Intel Celeron N3060 CPU and comes with 4GB of RAM. The device is backed by a 16 GB or 32 GB of eMMC storage which can be expanded via built-in SD card slot. The device is loaded with a 4090mAh battery, which the company claims can deliver up to 12 hours of battery life. On the connectivity front, Acer Chromebook N7 supports Dual-band Wi-Fi 802.11ac 2Ã—2 MIMO, Bluetooth 4.0, two USB 3.0 ports and HDMI port. The device runs on ChromeOS, which is an operating system designed by Google based on Linux kernel and comes with a price tag of $229.99 (Rs 15,700 approx.).

Acer added two new members to its Aspire series with launch of Aspire V Nitro and Aspire VX gaming laptops. The Acer V Nitro Black Edition is priced at $ 1,199 (approx. Rs 81,694) for the 15-inch variant, while 17-inch variant comes with a price tag of $1,399 (approx. Rs 95,321). On the other hand, Acer Aspire VX 15 comes with a price tag of $799 (approx. Rs 54,440). Both the laptops will be available in February in North America, China and EMEA (Europe, Middle East and Africa) countries. India availability has not been shared so far.

Starting with the Aspire V Nitro Black Edition, the laptop is powered by a 7th Generation Intel Core i7-7700HQ processor. The laptop is backed by the latest NVIDIA GeForce GTX 1060 graphics card with 6GB of dedicated GDDR5 VRAM1 and up to 16GB of DDR4 system memory, upgradable to 32GB using two soDIMM modules. It also comes with an NVMe PCIe Gen 3 or SATA SSD1, and an HDD1 of up to 2TB capacity for additional storage. The 17-inch laptop is also available with an optional Tobii IR Eye-tracking module. On the connectivity front, the laptop supports a USB Type-C port with Thunderbolt 3, two USB 3.0 ports (one featuring power-off USB charging), two USB 2.0 ports, and HDMI connection. On the audio department, the Aspire V Nitro, include four speakers tuned with Dolby Audio Premium and Acer TrueHarmony Plus technology, for the high-quality audio experience.

On the other hand, the Aspire VX 15 comes with 15.6-inch Full HD IPS screen and is powered by up to a 7th Generation Intel Core i7-7700HQ processor. The notebook also comes with up to NVIDIA GeForce GTX 1050 Ti1 graphics with GDDR5 VRAM (delivering up to 32GB/s bandwidth). The laptop offers up to 16GB1 DDR4 memory out of the box and can be user-upgradeable to a maximum of 32GB. Storage is provided by a 512GB SSD and 1TB HDD1. The gameplay experience is further supplemented with high-definition audio with Dolby Audio Premium, as well as Acer TrueHarmony sound and Skype for Business certification.

The company has also unveiled a new desktop PC under its new Aspire GX series. The VR-ready PC come equipped with up to 7th Generation Intel Core processors, up to 64GB of DDR4 RAM, and up to NVIDIA GeForce GTX 1070 graphics. On the storage front, it offers up to a 3TB1 HDD and a 256GB SSD. The PC features edgy armor-inspired housing with front-facing LED lighting that emits a sinister red glow. The desktop PC will be made available in February in EMEA and comes with a price tag with EUR799 (approx. Rs 56,740).