In international markets, Chromebooks and the iPad are seen as rivals 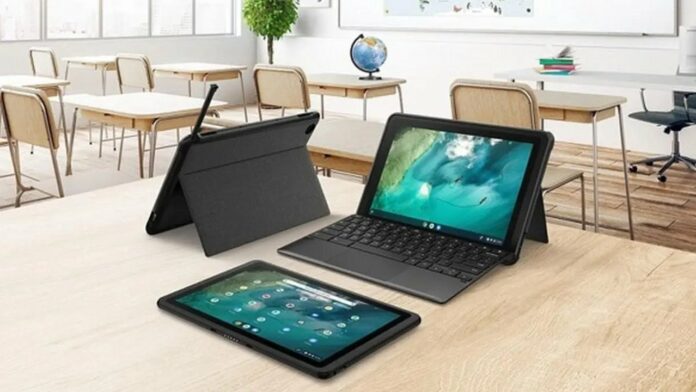 We have been getting asked a lot ever since Apple launched the new iPad – is the new iPad a better option than a Chromebook? This was not that much of a question in the past as the number of Chromebooks available in the Indian market was limited. However, in recent times, both HP and Asus have released Chromebooks in the Indian market, and some at extremely competitive prices, well below Rs 25,000. And that has raised the query about how Chromebooks compare with iPads – a query that is now being repeated with the release of the new iPad.

In international markets, Chromebooks and the iPad are seen as rivals, and with the greater availability of Chromebooks, that seems set to become the case in India as well. Interestingly, in its press release for the new iPad, Apple clearly stated that the new iPad was upto 3x faster than the best selling Chromebook (based on the Celeron N4000 platform).

The iPad has a clear performance edge

Now, the new iPad starts at Rs 30,900 for the base 64 GB Wi-Fi only edition. That is well above the base Chromebooks in India, which start at slightly below Rs 20,000. But then, the iPad does come with far more processing power (the A13 Bionic is a very fast chip even now), a better display, often similar better battery life (10 hours) and sound. and now even very good front and rear cameras, as compared to Chromebooks that are priced in its price range.

So, that should be simple, right? The new iPad is easily the better choice than Chromebooks – better processor, battery (in most cases), cameras, display and sound. And of course, it comes with a fantastic collection of apps. So, what’s left?

The iPad is a tablet, the Chromebook is a notebook!

Well, it is not as simple as that. The fact is that even though they may be used for similar purposes like Web browsing, working on documents and mail, social networking and the like, Chromebooks and iPads are very different devices in terms of design. The iPad is a tablet with a touchscreen interface. The Chromebook, on the other hand, is like your conventional notebook – it comes with a keyboard and a display that are almost always connected to each other. You get Chromebooks with and without touchscreens.

That notebook experience…without any dongles!

And while Chromebooks might not have displays that have as high a resolution as that of the iPad, they often have much larger displays and well, they boot up and shut down swiftly and have very good battery life. What’s crucial also is that unlike the iPad, which has a single lightning port, Chromebooks can come with multiple ports, including USB, USB Type C, HDMI ports and even card scanners. You can connect a flash drive, a portable hard drive or a mouse to a Chromebook easily.

Yes, you can do all this with an iPad too but that would involve getting dongles, which can be a pain in their own right. In fact, you would even have to invest in a keyboard if you have to do a lot of typing on an iPad! And while the iPad does have a fantastic array of apps, the Chromebook is a great option for those who prefer Android or are just used to working on Chrome on their desktops and notebooks – Chrome OS is after all, just based on the Chrome browser!

Pop a tablet, open a notebook – YOUR choice!

So, can the new iPad kill the Chromebook? Well, it depends on what YOU need from it. If a great touchscreen experience, a good processor, good cameras (especially for video calls, which have become SO important these days), great security and superb dedicated apps are what you want, the iPad is perhaps the best device you can get for Rs 30,990, and that includes not just Chromebooks but even budget Windows notebooks.  But yes, be ready to invest a little extra in a keyboard and other accessories if you actually want to use it as a notebook. If you want something that works just like a notebook out of the box with zero fuss and need to save money, the Chromebook remains a very good option.