BoAt has listed the Airdopes 181 on Amazon that seems to have revealed all the features and specifications of the TWS earbuds. 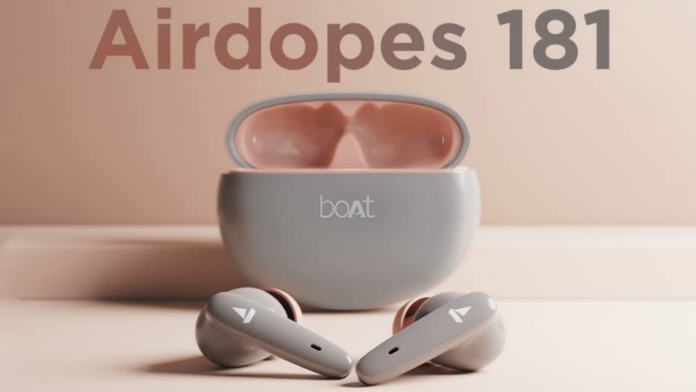 BoAt is on a launch streak in India where it recently launched the Airdopes 601 ANC, Watch Iris and Rockerz 333 Pro. The brand is gearing up to launch another accessory in India and it is the Airdopes 181. These are TWS earbuds, the features for which seem to have been revealed ahead of the launch.

Airdopes 181 have been listed on Amazon and the listing has revealed the design and specifications for the TWS earbuds. They seem to come with a stem-like design and feature BoAt’s ENx technology that helps in a better calling experience with clear voice on both ends.

The Airdopes 181 come with Beast mode which affects the latency of the earbuds. BoAt says that technology decoder reduces the latency up to 65ms to keep the audio and video in sync. The TWS earbuds come with fast charging where a 10-minute charge can get you up to 90 minutes of playback time.

With the case, you get up to 20 hours of total playback time. Further, they have an ergonomic fit and weigh in at just 2.9 grams. They handle connectivity via Bluetooth 5.2 and come in four colours including Grey, black, blue, and white. These TWS earbuds are powered by 10mm drivers and have IWP technology using which one can connect the earbuds to the phone as soon as they open the lid.

The Airdopes 181 have IPX4 water resistance and can be charged with USB-C. And lastly, the TWS earbuds have touch controls along with voice assistance support where you can access Google Assistant or Siri just with a tap on the earbud.