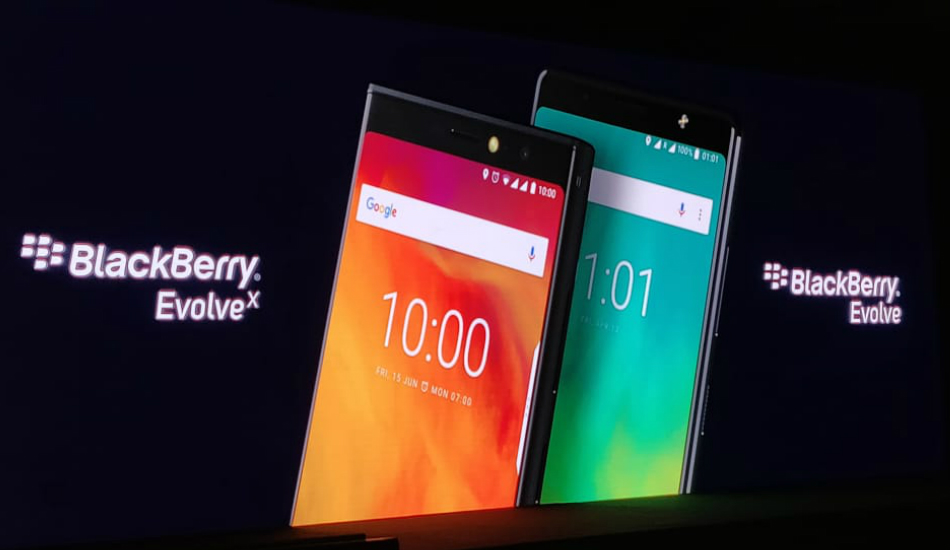 The BlackBerry Evolve comes powered by a Snapdragon 450 SoC with Adreno 506 GPU, 4GB of RAM and 64GB of internal storage. Unlike the KEY2 which comes with a QWERTY physical keyboard, the Evolve lineup will go traditional with a 5.99-inch FHD+ LTPS display that has a resolution of 1080 x 2160 pixels.

A week after launching the KEY2 smartphone in India, BlackBerry has launched two moreAndroid-powered devices in India – the BlackBerry Evolve and BlackBerry Evolve X. The devices are manufactured by BlackBerry’s Indian licensee Optiemus Infracom and will be made available for real across India, Sri Lanka, Nepal and Bangladesh. The Evolve and Evolve X come in at asking prices of Rs 24,990 and Rs 34,990, exclusively on Amazon India with the former set to go on sale later this month.

Starting off with the BlackBerry Evolve, the device comes powered by a Snapdragon 450 SoC with Adreno 506 GPU, 4GB of RAM and 64GB of internal storage. Unlike the KEY2 which comes with a QWERTY physical keyboard, the Evolve lineup will go traditional with a 5.99-inch FHD+ LTPS display that has a resolution of 1080 x 2160 pixels, 500 nits of brightness and an oleophobic coating on top.

In contrast, the Evolve X is powered by a higher-end Snapdragon 660 processor withAdreno 512, 6GB of RAM and the same 64GB of internal storage. Both phones come with a massive 4,000mAh battery whichis claimed to last for 21 days on standby, 24 hours on 4G and 45 hours on music playback. The Evolve X is enabled with BlackBerry’s Boost charge technology that’s based on Quick Charge 3.0. BlackBerry also bundles a BlackBerry wireless charger with the Evolve X as well. Bothdevices run on Android 8.1 Oreo which is secured by BlackBerry itself. It’s also the first time BlackBerry has employed a fingerprint scanner at the back of the phone.

There’s a 16MP front-facing camera with wide-angled selfie and studio mode on both the device. However, the rear cameras are a 12MP + 13MP (telephoto with 2X optical zoom) setup on the Evolve X and 13MP + 13MP (RGB + Mono) on the cheaper Evolve device. Connectivity options include a USB 2.0 Type-C port,4G VoLTE, Wi-Fi 802.11 ac,Bluetooth 5 LE and GPS + GLONASS.

The BlackBerry Evolve will go on sale later this month with the Evolve X slated for a release in September. Blackberry will start selling the Evolve and Evolve X for Rs 24,990 and Rs 34,990 respectively as an Amazon India exclusive. The device can be purchased with a no-cost EMI option through ICICI Bank credit cards with an additional 5 percent cash back as well as Rs 3,950 worth of added benefits from Reliance Jio.