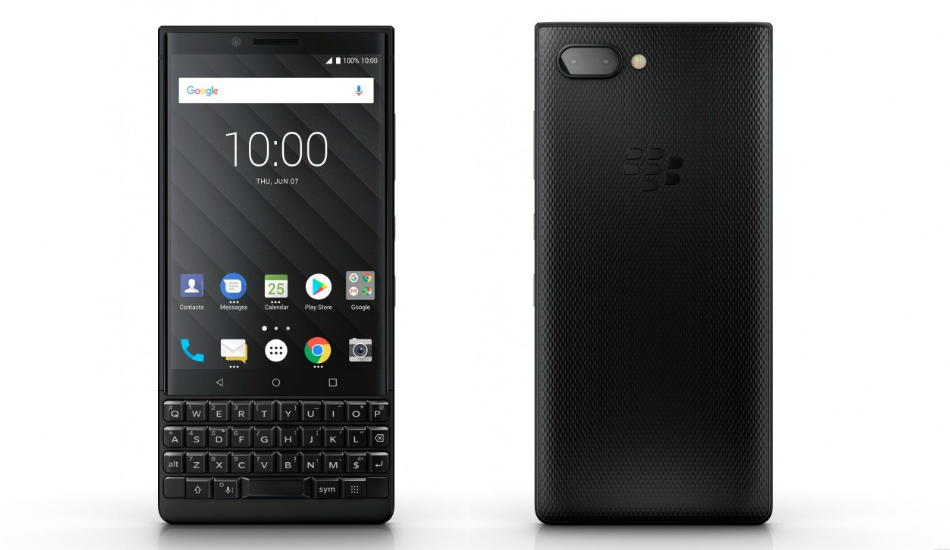 The smartphone is backed by a 4.5-inch Full HD IPS LCD display with a screen resolution of 1620 x 1080 pixels and an aspect ratio of 3:2 coupled with a pixel density of 433ppi. On the inside, the KEY2 packs a Qualcomm Snapdragon 660 SoC clocked in at 2.2GHz with 6GB of RAM and up to 128GB of onboard storage.

Opitemus Infracom Limited, a brand licensee of BlackBerry smartphones, has today announced the launch of its new flagship device, the BlackBerry KEY2, in India. The smartphone comes with a price tag of Rs 42,990 and it will be exclusively available on Amazon starting from July 31, 2018.

The company has also announced some bundled offers with the latest smartphone. To start with, Reliance Jio users will get a cashback offer of Rs 4,450 and ICICI bank cashback offer of 5 per cent along with additional launch benefits.

Building on its predecessor, the KEY2 also features a physical QWERTY keypad, which the brand claims is enhanced with n-keyboard fingerprint sensor with updated mechanics for an improved tactile response and convenient user experience. The phone comes with some security features as well. There is DTEK by BlackBerry app that enables users to automatically view how apps may be accessing personal data and manage permissions appropriately.

Then there is Locker, which can only be accessed through fingerprint or password, helping store and protect sensitive user data, apps and content such as photos and downloaded files. The phone features an aluminium frame with a soft textured finish at the back to give a good grip and comfort.

The smartphone is backed by a 4.5-inch Full HD IPS LCD display with a screen resolution of 1620 x 1080 pixels and an aspect ratio of 3:2 coupled with a pixel density of 433ppi. On the inside, the KEY2 packs a Qualcomm Snapdragon 660 SoC clocked in at 2.2GHz with 6GB of RAM and up to 128GB of onboard storage. The memory can be further expanded up to 2TB via a microSD card. The KEY2 runs on Android 8.1 Oreo out-of-the-box and will be seeded with monthly security updates by Google since the device comes under the Android Enterprise Recommended initiative. BlackBerry has guaranteed that KEY2 users can expect one major Android update, meaning Android P might as well be rolled out to the device. BlackBerry has also packed in its signature BlackBerry Hub software that pushes the enterprise-oriented experience.

On the camera front, the comes loaded with a dual-camera setup at the rear. There are a 12-megapixel primary sensor and a 12-megapixel secondary sensor with 2x optical zoom. The camera features a 4X Optical Superzoom mode that the company claims the zoomed in shots are made noise-less by sticking several pictures that are captured through a single press of the shutter like Google makes use of its HDR+ feature. For the front, there is an 8-megapixel front-facing camera for selfies and video calling.

The smartphone is backed by a 3,500mAh battery with Quick Charge 3.0, which the brand claims can charge the device up to 50 per cent in 40 minutes. There is a Smart Battery Experience learns from daily charging habits, then recommends when to charge so you have enough battery life to make it through that next meeting, flight or event. On the connectivity front, it features Bluetooth 5.0 LE, Type-C USB 3.0, USB OTG, NFC, FM Radio.