Apple to release iOS 7 on September 10

An email from Apple Siri's developers inadvertently reveals that the iOS 7 software update is set to arrive on September 10 next month.

Apple is quietly preparing for the launch of its new iPhone model next month. The Mobile Indian reported that the iPhone 5S will be announced on the 10 September next month. Nuance, the developers of Apple Siri – the personal assistant, sent out an email to the developers in their voice recognition that the iOS 7 will launch on 10 September. Owen Williams posted a snapshot of the email on his blog.

Apple is currently pushing out the iOS 7 beta builds to the participating Apple iOS Developers. Apple Siri personal digital assistant will get few new improvements with the iOS 7 updates. As per previous reports, Apple was expected to make the iOS 7 publicly available on 16 September. But the freshly sent out email by the Siri developer company Nuance points that iOS 7 GA (General Availability) will happen on 10 September. 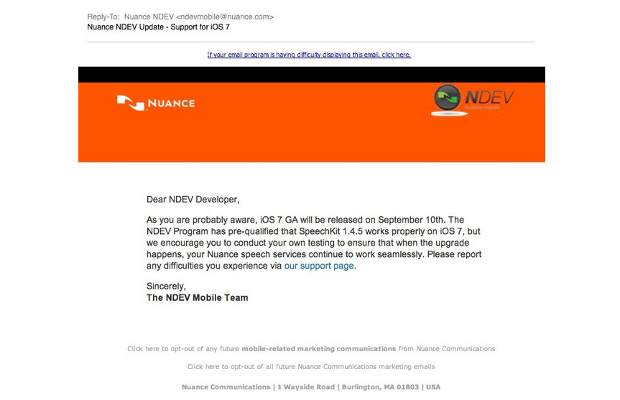 Nuance sent out an email to the developers part of the NDEV program about the expected iOS 7 arrival date. Later that email was pulled back by the Nuance. This inadvertently confirmed the arrival of the iOS 7 software update. It is quite possible that the new iPhone 5S announcement and iOS 7 arrival will happen on the same date.

So far, the iOS developers have tested six beta builds of the iOS 7 software update and couple more can be expected before the final version rolls out on 10 September.