The phone features a 5.2-inch full HD LTPS IPS display with Corning Gorilla Glass protection and is powered by a 2.2GHz octa-core Qualcomm Snapdragon 630 processor along with Adreno 508GPU.

First reported by Android Police, the update comes with a build number of OPW27.1 and brings Android security patches along with few other upgrades. The Android One Moto X4 works with Google’s Project Fi wireless carrier. Google introduced Project Fi in 2015 and it basically uses a combination of wireless and cellular networks to place calls and texts. The technology uses T-Mobile, Sprint and US Cellular networks in the US.

Lenovo-owned Motorola launched its Moto X4 smartphone in India in November this year starting at Rs 20,999. The Android 8.0 Oreo update is currently available as an OTA but can be manually downloaded to the phone. Users can go to Settings> About Phone, to check for the latest update. 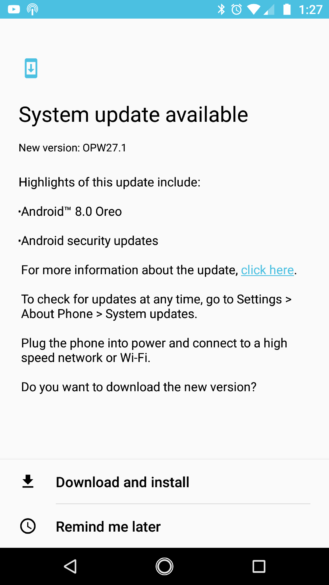 The Android One Moto X4 now runs on Android 8.0 Oreo and is juiced up by a 3000mAh battery with turbo charging. On the connectivity front, it supports 4G VoLTE, WiFi 802.11.ac, Bluetooth 5.0, GPS, GLONASS, NFC and USB Type-C port.