Android Nougat update rolled out for Moto M in India

Moto M was launched in India last year in December for Rs 15,999 with Android 6.0.1 Marshmallow

Motorola has finally rolled out the Android Nougat update for its Moto M smartphone in India, after teasing it soon after its launch, as per a report of TechDroider. The smartphone was launched last year in India with Android 6.0.1 Marshmallow operating system.

The update comes with build XT1663_S356_170621_ROW and brings Nougat to the device. Apart from this, the update also adds Duo video calling app without having any other changelog. 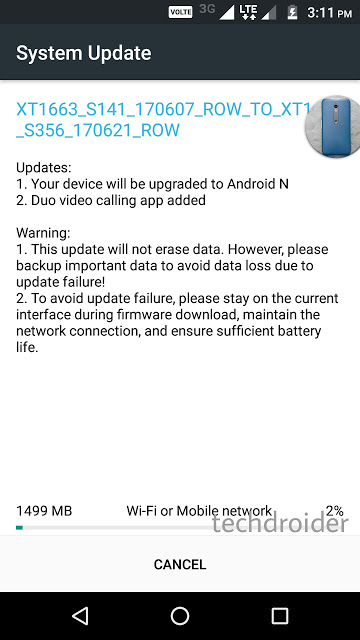 Android Nougat brings in a bunch of new features other features including split-screen multitasking, more customisable quick settings, improved Google keyboard, enhanced notifications and recent applications window. Further, the latest Android OS version also brings in ‘Double Tap’ on the Recent button to switch between the two most recent apps which come in very handy at times. For extended battery life, Android Nougat comes with ‘Doze on the go’ which will get activated even if your Nougat running device is in your pocket.

The company advises you to update when the battery in your phone is at least 50 percent charged and you are connected to a Wi-Fi network. Users must have 2GB of free space to download and install the update as the update weighs 1499MB. Since the update is being rolled out over-the-air, it may take some time before it comes to your device. One can also manually check for the update by going to Settings ->About Phone -> Software Update.

Moto M was launched in India last year in December for Rs 15,999 with Android 6.0.1 Marshmallow. It comes with a 5.5-inch Full HD (1920 x 1080 pixels) Super AMOLED display. Moto M is powered by an Octa-Core 2.2 GHz MediaTek Helio P15 CPU coupled with Mali-T860 MP2 GPU. For the memory, the device comes in two variants – 3GB RAM with 32GB of internal storage and 4GB RAM with 64GB of internal storage which will be further expandable up to 128GB via microSD. Unlike the other Moto devices, the Moto M will feature a fingerprint scanner at the back.

Share
Facebook
Twitter
WhatsApp
ReddIt
Previous articleSamsung Galaxy Note 8 will be available in 64GB and 128GB variants: Report
Next articleMoto C Plus is up for grabs for Rs 499 with Flipkart Exchange Offer, but there is a catch!
RELATED STORIES