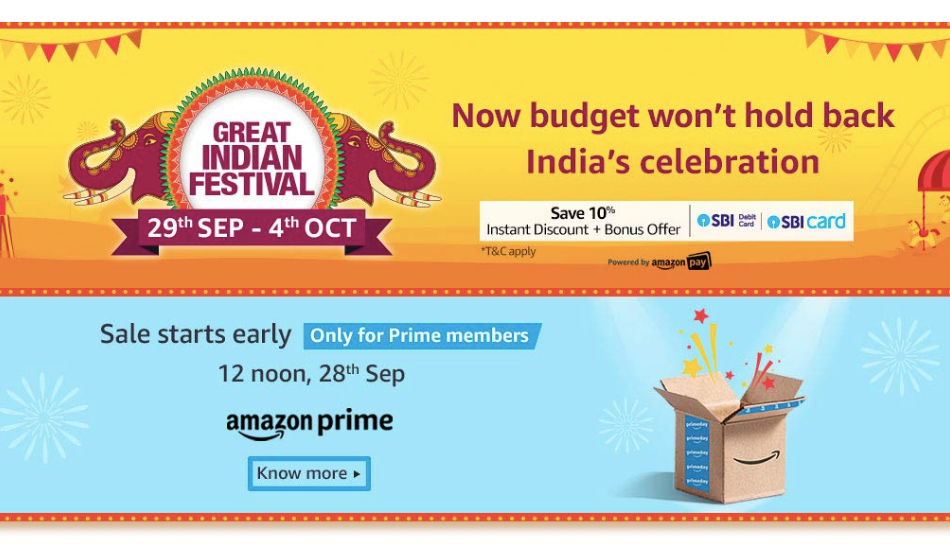 Amazon has already teased a few smartphones that will be available on offer during the Great Indian Festival sale and has confirmed prices of some Galaxy M-series smartphones, Honor phones and LG smartphones.

Amazon is hosting its Great Indian Festival sale from September 29 to October 4. The six-day sale will offer discounts and deals on smartphones, TVs, laptops and more. Prime members will get access to all deals, a day in advance, starting from 12 PM noon on September 28.

The e-commerce portal has revealed that users will get up to 40 percent discount on smartphones of 2019, up to 75 percent off on TVs and home appliances and up to 45 percent discount on its own products including the Fire TV, Kindle or Echo. The sale will see the launch of 15 new smartphones, over 6000 deals on electronics and prizes of up to Rs 5 lakh.

Customers can avail a 10 percent instant discount on making a payment through SBI debit and credit cards. There will also be no-cost EMI payment options as well as exchange deals on smartphones. Amazon is offering a 1-year free screen replacement with select smartphones during the sale.

Amazon has already teased a few smartphones that will be available on offer during the Great Indian Festival sale. The company has until now confirmed prices of some Galaxy M-series smartphones, Honor phones and LG smartphones.

During the sale, Samsung will launch its Galaxy M30s for a starting price of Rs 13,999 while the older Galaxy M30 will be available starting for Rs 9,999. The Galaxy M10, M10s and M20 will be available for Rs 7,999, Rs 8,999 and Rs 9,999 respectively. Samsung has also teased discounts on the Galaxy Note 9, Galaxy A70 and Galaxy Note10 Plus during the sale but its discounted prices will only be disclosed on September 25.

Xiaomi will be offering discount and exchange deals on the Redmi 7, Xiaomi Mi A3 and Redmi Y3. More details about discounts from the company will be disclosed by September 24.

The Amazon Great Indian Festival will be held between September 29 and October 4. Prime members will get access to all deals from September 28 at 12 noon.