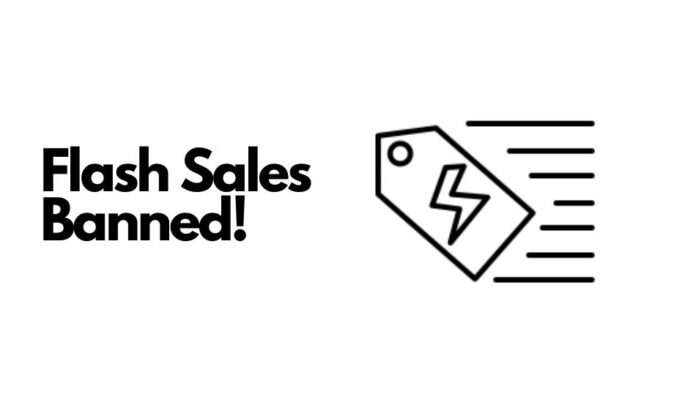 Flash Sales have been a part of India’s e-commerce ecosystem for a long time, but that will change soon as the Government of India on Monday proposed a bunch of tweaks to the e-commerce rules in the country that now put a ban on a certain type of flash sales hosted by majors like Flipkart and Amazon.

The proposal, which is applicable to both Indian and foreign players, is open for public consultation until July 6, the Indian government statement said.

According to a statement issued by the Food and Consumer Affairs Ministry on Monday, the Government will now take punitive action against the platform if sellers don’t deliver. The new rules aim to strengthen the regulatory regime, protect consumers’ interests, bring transparency and encourage free and fair competition, the statement said.

“Certain e-commerce entities are engaging in limiting consumer choice…wherein one seller selling on the platform does not carry any inventory or order fulfilment capability but merely places a ‘flash or back-to-back’ order with another seller controlled by platform,” the Ministry said, resulting in a ban on certain kinds of flash sales. Companies like Xiaomi have been regularly hosting flash sales in India in the past, which may be a topic of concern for the company now.

“This prevents a level playing field and ultimately limits customer choice and increases prices”, as per the statement issued. However, standard flash sales by third-party sellers are still allowed on the platforms, the Ministry’s statement clarifies.

To strengthen the grievance redressal mechanism, the government has also proposed to appoint Chief Compliance Officers and nodal contact persons for 24×7 coordination with law enforcement agencies to ensure compliance with the Consumer Protection Act, 2019.

The e-commerce services will now also be given a registration number as a part of a new framework for the registration of every e-commerce entity, which will be displayed on the website and the invoice of every order.

This “would help create a database of genuine entities and ensure that consumers can verify its genuineness before transacting”. “Mis-selling has been prohibited. That is, selling goods and services…by deliberate misrepresentation of information.”, the Ministry said in the statement.