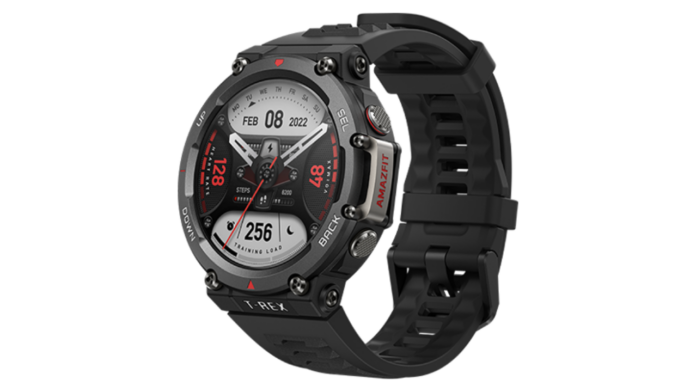 Update 30/06/2022: Amazfit has announced that it will launch the T-Rex 2 smartwatch in India on July 2nd at Rs 15,999 on Amazon and Amazfit’s official website. As for offline, it will be firstly available with Helios from the launch day i.e., starting from 2nd July onwards.

The Amazfit T-Rex 2 Amazon landing page points towards the imminent launch of the T-Rex 2 in India. It is priced at CNY 1,499 (approx Rs 17,400) in China and comes in four colour options including Xing Yahoei (translated) which looks like dark black, Midnight Black, Jungle Green and Earth Yellow.

The Amazfit T-Rex 2 is one of the most durable smartwatches that comes with a rugged as well as a sleek design. The watch weighs 66.5g including the strap and it comes with 15 military certifications. The company says that the watch can be used in extremely cold weather with ambient temperatures as low as -30°C. In addition, it is also built with up to a 100-meter water resistance level, five-star dual-frequency precise positioning, trajectory & navigation, and other features.

The watch sports a 1.39-inch AMOLED screen with deep blacks and high brightness. The T-Rex 2 packs four stainless steel metal buttons which are processed and polished by sandblasting and etching. As for the band, it is made of antibacterial silicone material, to make it skin-friendly and comfortable while reducing the chances of allergies.

The watch packs a 500mAh battery that is rated to output up to 24 days of battery life on normal usage. The battery life can last up to 45 days in basic watch mode and 10 days in heavy usage.

Lastly, the Amazfit T-Rex 2 comes with support for five global satellite positioning systems, including Beidou, GPS, GLONASS, Galileo, and QZSS. In addition to the L1 frequency band, you also get the L5 frequency band which can reduce the ionospheric and ground multipath errors and reduce the interference of the external environment on the positioning accuracy of the watch.