The Amazfit GTR 4 has been launched in India. The smartwatch sports a 1.43-inch AMOLED display with a 466×466-pixel resolution. 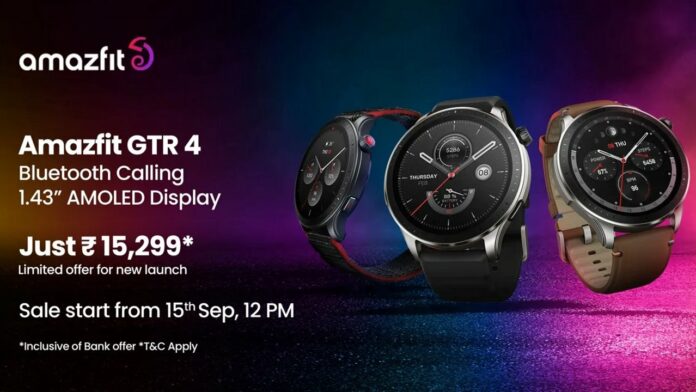 Amazfit has launched the new Amazfit GTR 4 smartwatch in India. The new smartwatch sports a 1.43-inch AMOLED screen, over 150 sports modes, Bluetooth Calling, up to 14 days of battery life and more.

Let’s see the Amazfit GTR 4 price in India, specifications and other details.

Amazfit GTR 4 smartwatch is priced at Rs 16,999 in India. As a limited period offer, the company is offering a discount via bank offer which brings the final price to Rs 15,299.

The smartwatch will go on sale today at 12 PM via Flipkart and Amazfit e-store. It comes in Superspeed Black and Racetrack Grey colour options.

Amazfit GTS 4 Mini launched in India at an introductory price of Rs 6,999

The Amazfit GTR 4 sports a 1.43-inch AMOLED display with an HD resolution and is built with a metallic mid-frame. The smartwatch also supports an always-on display. The watch is equipped with a 24-hour heart rate monitor, SpO2 sensor, and stress tracker for health features. It is capable of monitoring sleep patterns and breathing quality at night.

Moving on, the new watch Alexa as the voice assistant. It also supports Bluetooth calling and lets you store music on the device. Users can even receive and answer Bluetooth calls using the built-in microphone and speaker.

As for battery life, the company claims that the smartwatch will offer up to 14 days with regular use after a full charge. Additionally, the GTR 4 has dual-band GPS antenna to track real-time movement via the satellite.