Meizu M6S is said to feature a 13-megapixel rear camera and a 5-megapixel front-facing selfie-camera.

The Meizu M6S has been surfacing online via several leaks and rumours for the past few weeks. And now the device seems to have been certified by TENAA certification website in China as well.

A Meizu smartphone with the model number M172C surfaced on TENAA earlier this month via PlayfulDroid. As per reports, the spotted device on the listing is none other than the Meizu M6S. However, the TENAA listing does not carry any major specs details and the images for the Meizu M6S. 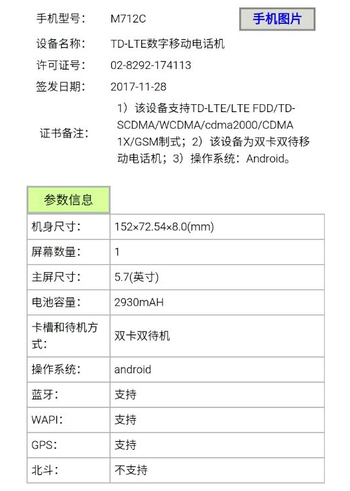 As per the TENAA listing, the Meizu M6S will feature a 5.7-inch display and a 2,930mAh battery. Apart from this, the listing mentions the various networks that the phone supports. The handset will measure 152 x 72.54 x 8.0mm

Recently, a hands-on video revealing its screen, the back panel, and the right side surfaced online. The video revealed that Meizu M6S will be sporting 18:9 display with tiny bezels on top and bottom.

Another earlier report has also revealed that the Meizu M6S will be launched next month and it will be priced at 2500 Yuan which is approximately Rs 24,253.