The Alcatel Idol 5S is said to have 3GB of RAM.

Alcatel seems to be working on its next Idol series smartphone as an unannounced TCL manufactured Alcatel smartphone named as Idol 5S has now been spotted on a GeekBench benchmarking website. Alcatel, the TCL-owned company is expected to unveil five smartphones at the upcoming Mobile World Congress event scheduled to be held from this month from 28th February to 2nd March. Out of them, Alcatel Idol 5S is expected to be unveiled at the event. 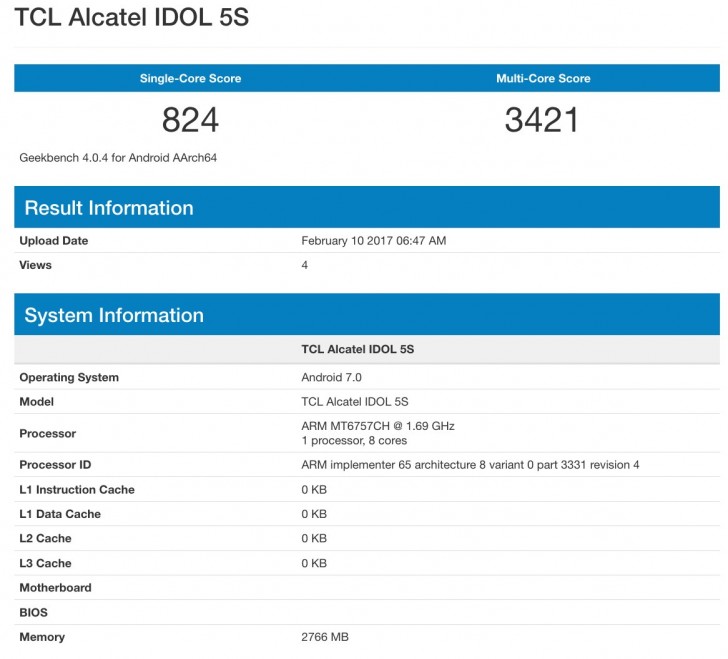 The rest of the specifications are not revealed in the listing but we expect them to be leaked in the coming days. We also expect the Idol 5S to feature a single rear camera setup since Helio P series SoC doesn’t support dual camera setup.

Alcatel had launched its VR enabled Windows 10 smartphone named as Idol 4S last year. The smartphone comes with Windows Continuum support, which allows the user to connect the device to monitor, keyboard, and a mouse to provide impeccable desktop experience. The Idol 4S also houses a fingerprint scanner, which is placed just below the camera module, which allows secure login via Windows Hello.

Further, the Alcatel Idol 4S features a 5.5-inch full HD AMOLED display with a resolution of 1080×1920 pixels. It comes equipped with Quad-Core (2X2.15GHz + 2X1.6GHz) Snapdragon 820 processor, along with Adreno 530 GPU. It comes with 4GB of RAM, and 64GB of internal storage, which can be further expandable up to 128GB via microSD card. The Idol 4S flaunts a 21-megapixel rear camera with Sony IMX230 sensor, Dual LED flash and an 8-megapixel front-camera with 84-degree wide angle lens, Single LED flash for selfies and video chats. The smartphone gets its strength from the 3000mAh battery, which claims to deliver up to 20 hours of talk time. Moreover, the device comes with USB Type-C port and also has Dual 1.2W multi-directional speaker. Besides, the smartphone offers Dual SIM, 4G LTE, Wi-Fi (802.11 a/b/g/n/ac), NFC, Bluetooth 4.1, and GPS. The handset measures 153.9×75.4×6.99 mm and weighs 152 grams.

Recently, another Alcatel 5046S smartphone was spotted on GFXBench benchmarking website. As per GFXBench listing, the Alcatel 5046S will have a 5-inch HD display with a resolution of 1280 x 720 pixels. The smartphone will feature a 1.1GHz quad-core Qualcomm (Cortex A7 – ARMv7) processor, which will be paired with Qualcomm Adreno 304 graphic processor. It will come with 2GB of RAM and 16 GB of internal storage. The smartphone will run on Android 7.0 Nougat operating system.

On the camera front, the smartphone will sport an 8-megapixel rear camera with autofocus, face detection, LED flash, HDR photo and capable of recording HD (1280 x 720) videos. On its front, it will have 5-megapixel front-facing camera for selfies and video chats. Besides, the Alcatel 5046S will offer Single SIM, WiFi, GPS, Bluetooth, Accelerometer, Digital Compass, Gyroscope, and Light sensor. Looking at the specification, the smartphone seems to fall in the budget segment.