The free data will be provided for a period of three months, starting from March 13th.

Airtel is giving 30GB of free data through its recently announced promotional offer named as Airtel Surprise. The free data will be provided for a period of three months, starting from March 13th.

But there is a catch. The company has put a monthly cap of 10GB, which means users will get 10GB of data for three months, making a grand total of 30GB. Users can claim this claim this offer from My Airtel app and can be claimed until March 31. 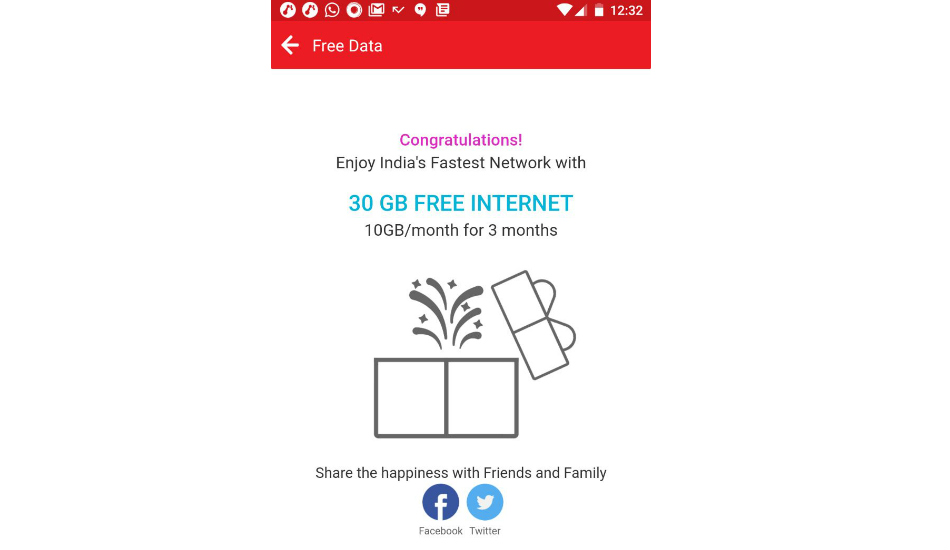 In order to avail the offer, one need to download the application from the Google Play Store or Apple’s App Store. When you open the application, it will show a dialogue box to claim the surprise, click it to avail this offer.

Recently the company launched its Rs 345 recharge pack for select postpaid users that offer free unlimited Local+STD calls along with 28GB of data with a validity of 28 days. offers. This 28GB of 3G/4G data is divided into 500MB for every day and 500MB per night.

Vodafone is offering 28GB of mobile data with a daily limit of 1GB along with free unlimited calls for Rs 348. Not only this, first-time subscribers to this plan get double the benefit for double the number of days. In other words, a first time user will get 56GB of data (1GB daily cap) with unlimited free calls for 56 days. Idea on the other hand also has a similar pack of Rs 348 in which it offers 14GB of data with a daily cap of Rs 500 MB along with unlimited free calls.

Companies like Airtel, Vodafone and Idea are trying hard to counter Reliance Jio’s latest offer named asJio Prime through which a user will get free unlimited calls, SMS and 1GB internet per day for Rs 303 per month.