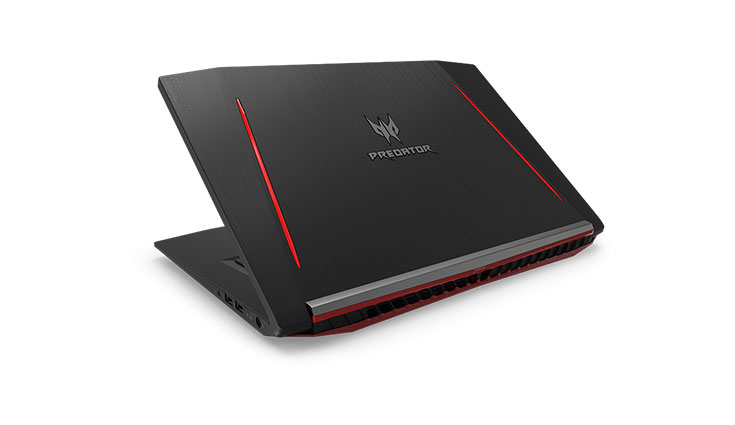 Acer also upgraded its Professional Monitors and HDR-Compatible Projectors with the launch of the new H7850 and V7850 4K projectors and the new ProDesigner PE320QK 4K LED monitor.

In its global press event held in New York yesterday, Acer has updated its gaming notebook lineup with its new Predator Helios 300 and Predator Triton 700 with Acer’s new advancements such as AeroBlade 3D and other advancements in notebook technology.

Acer Predator Helios 300
The Predator Helios 300 comes in 15.6-inch and 17.3-inch options with Full HD (1920 x 1080 pixels) resolution. This gaming notebook is powered by 7th Gen Intel Core i7 (7700HQ) or i5 processor (7300HQ) along with NVIDIA GeForce GTX 1060 or 1050Ti GPU which is also overclockable. The device boasts 16GB of DDR4 RAM (upgradable to 32GB) along with an SATA SSD and 1TB of Hard Drive. All the hard drives and RAM can be easily upgraded through a compartment door on the bottom of the notebooks.

For the connectivity, the Helios 300 comes with USB 3.1 Type-C port, a USB 3.0 port (featuring power-off USB charging), two USB 2.0 ports, and an HDMI 2.0 port. Further, it supports Wi-Fi 802.11ac and also includes a Gigabit Ethernet port for those preferring a hard-wired connection.

Apart from the Full HD display, Acer has also focused on audio by providing Dolby Audio Premium and Acer True Harmony technology. Acer’s latest AeroBlade 3D fan with ultra-thin metal blades keeps the notebook running at optimal temperatures. Moreover, you get PredatorSense software which gives real-time system information and overclocking to monitor and control the system’s vitals from one place.

Acer Predator Triton 700
With the Predator Triton 700, Acer has focused more on the ultrathin design without compromising on the power. The Predator Triton 700, for instance, also comes with Acer’s new AeroBlade 3D fans that increase airflow by 35% yet take up less space within the device.This gaming laptop comes with a standard-voltage 7th Generation Intel Core processors and latest NVIDIA GeForce GTX 10-Series graphics in a shell which is just 18mm thick. Apart from this, we get 32GB of DDR4 2400MHz RAM and two NVMe PCIe SSDs.

LiquidLoop Cooling System – Acer Switch 5 and Aspire U27
Another technology which was recently introduced by Acer is LiquidLoop which is basically a cooling system. Adding a new member with this technology, Acer introduced its Acer Switch 5 which is a 2-in-1 notebook powered by 7th generation Intel Core i7 and i5 processors with no fans which are where LiquidLoop technology comes in handy.

Apart from this, Acer also introduced its Aspire U27 which comes with a 27-inch Full HD wide viewing angle display, and a specially designed subwoofer that offers powerfully deep bass, this all-in-one provides entertainment with a punch.Further, the All-In-One comes with an ultrathin design of 12mm (0.5 inch) with a diamond cut v-shaped metal stand.