Google, Acer team up to unveil the Chromebook Tab 10 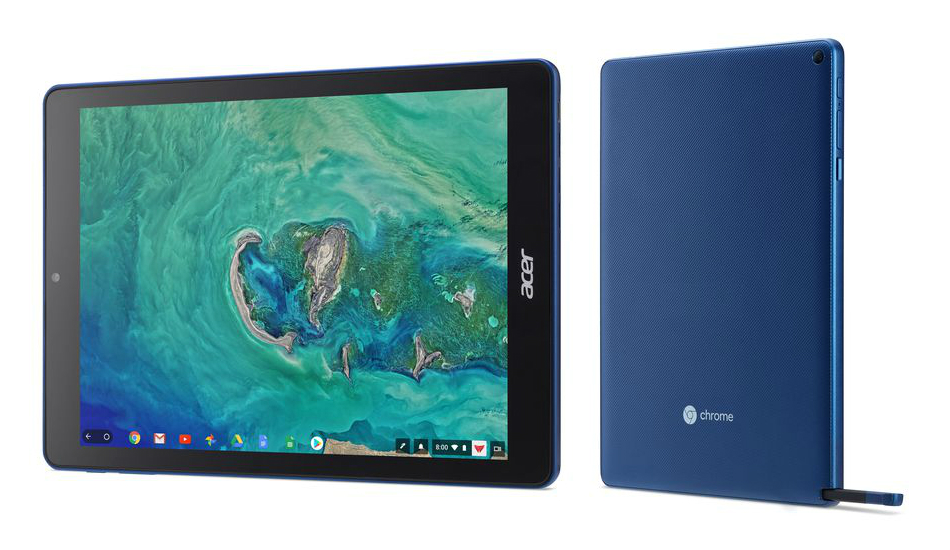 The tablet is the first of its kind running Chrome OS and is meant to directly compete with Apple’s upcoming iPad which is set to launch tomorrow.

Long has it been since Chrome OS established itself as the lighter alternative to Windows and macOS. In its long run, the interface has come from running on notebooks and desktops to convertibles and all-in-ones but has never been featured on a tablet. Enter, the Acer Chromebook Tab 10, the first tablet device to run on Chrome OS, created from a joint collaboration between Acer and Google.

The Tab 10 comes with a 9.7-inch screen that runs up to a resolution of 2048 x 1536 pixels. Does that ring a bell? That’s exactly the dimensions of a regular iPad. On the inside, the Chromebook Tab 10 features Google’s OP1 processor (the same that powered the Samsung Chromebook Plus notebook) with 4GB of RAM and 32GB of internal storage. The tablet comes backed up by a 34Wh battery which would last for an estimated 9 hours on a single charge.

In terms of connectivity, the Acer tablet comes with a USB-C port, microSD slot, a 3.5mm headphone jack, 802.11ac Wi-Fi, and Bluetooth 4.1. The Chrome OS tablet comes with a built-in passive Wacom EMR stylus which doesn’t require any extra charging. The Acer tablet packs in a 5MP camera at the back with a 2MP shooter on the front for the purpose of video calling which is also installed with dual speakers on the sides.

The Chromebook Tab 10 runs on the web-based Chrome OS interface but if you ever get fed up with browsing the Internet, the tablet also offers support for running Android apps and games. Google has revealed that it plans to add support for augmented reality apps which means the device might already be integrated with Google’s AR Core.

With its extensive cloud management tools and lower cost compared to its Apple counterpart, the Acer Chromebook Tab 10’s targeted audience looks to be schools who are already used to the Chrome OS interface. The tablet will go on sale in the US by the start of next month for an asking price of $329 (approx. Rs 21,360) which is cheeky on Google’s behalf keeping in mind the current iPad 9.7 goes for the same. At $329, the Chromebook Tab 10 is still quite an expensive piece of hardware, costlier than the current line of Chromebooks but if an iPad alternative is what you’re looking for, Acer and Google have brought out a potential candidate in the tablet race.