43 inch Xiaomi TV might cost this much in India

Curiously, the same TV was reportedly launched in China sometime back for around Rs 19,000.

Chinese electronic giant, Xiaomi is all set to announce its TV range in India which will include TVs of 32 inches, 43 inches, 49 inch, 50 inch, 55 inch and 65 inch sizes. The company has already announced that couple of days back but it has not revealed prices of the models. However, the TVs got listed on Xiaomi India's website which have spilled the bean. 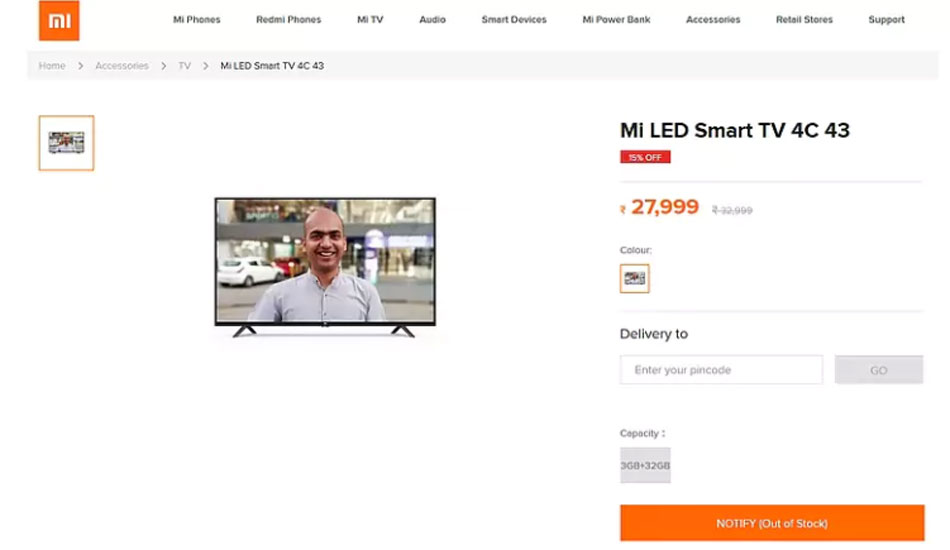 Meanwhile, Xiaomi on Saturday launched a 40-inch TV, Mi TV 4A, in China. This was launched in China recently for CNY 1,699 or about Rs 17,000. The Mi TV 4A too is expected to be launched in India. But considering the current premium pricing of the 43 inch TV (its still not confirmed though), it is hard to believe that the Mi TV 4A would cost just Rs 17,000 in India.

Xiaomi currently is offering the Mi LED Smart TV 4 in 55 inch screen size for Rs 39,999. The Mi Mi LED Smart TV 4 has a 4.9mm ultra-thin frameless metal body and a sound system that supports Dolby Audio plus DTS-HD to deliver a stunning viewing experience at home. With 4.9mm thickness, the TV is said to be World's thinnest LED TV. Xiaomi Mi TV 4 has a 4K Ultra HD display with 3,840 x 2,160 pixels resolution and 178-degree viewing angle.

The TV is powered by Quad-core 64-bit TV processor with Mali-T830 GPU. The Dolby Atmos utilises the down-firing speakers for the sound output.  The new Mi TV 4 comes with 2GB RAM and 8GB internal storage and for connectivity, it supports High-speed ethernet, Dual-Band WiFi( 802.11ac), Bluetooth 4.0, 3 x HDMI and 2 x USB ports. The TV comes with Mi Remote control with a unique 11 button design. It also has Bluetooth so you don't have to point at the TV to control it.