How to create keyboard shortcuts in iOS 5 devices

Create shortcuts for long and frequently used phrases/acronyms to save up some time and effort to make them appear automatically.

Apple has released the new iOS 5.0 update for its iPhone, iPod touch and iPad tablet. Just in case you have not updated your device yet, now would be a good time to go ahead and do it. Amongst several new and interesting features introduced, one of the impressive and heavily useful one was &#151keyboard shortcuts.

Typing with the optical keypad on the iPhone or iPod touch can be bit tiresome especially when you have to respond emails that are bit of redundant in nature. Also not everyone is accustomed with the acronyms. Hence, you can use the keyboard shortcuts in the iOS 5 running devices so that you can freely use the internet lingo while chatting like OMG, LMAO, WTH, ZOMG, etc. Alternatively, you can create shortcuts for the phrases used frequently like ‘As per the company policy’ and so on.

Obviously the basic requirement is an Apple device running the iOS 5.0 update to get started with.

Open the Settings App, go to General and then choose Keyboard.

In the Phrase box, you are supposed to enter the phrase for which shortcut needs to be defined. For instance, ‘As Per Company Policy’ in the box next to Phrase. Then you can define any shortcut like in this case we kept ‘apcp’ as shortcut for the phrase. 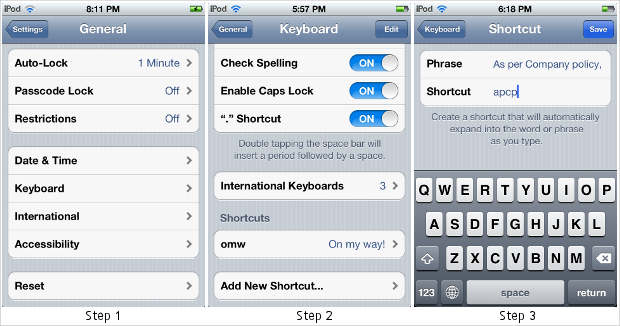 Hit save button when you are done. Go ahead and test out your shortcut in Notes app. We typed apcp shortcut, pressed space key and entire phrase automatically appears typed.
Using shortcuts will save lot of time and is kind of complementary to those modern day input methods like Swype, SureType and T9. 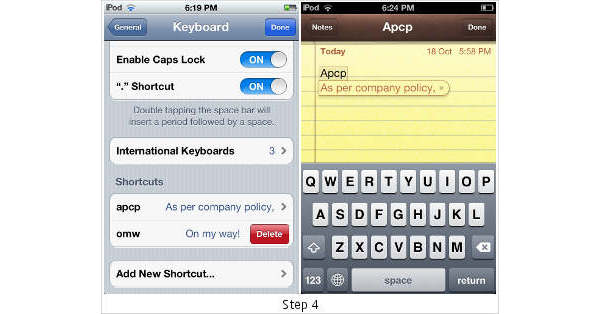