Bitcoin Pizza Day marks the day on which two of the most expensive pizzas in the history of mankind were sold. 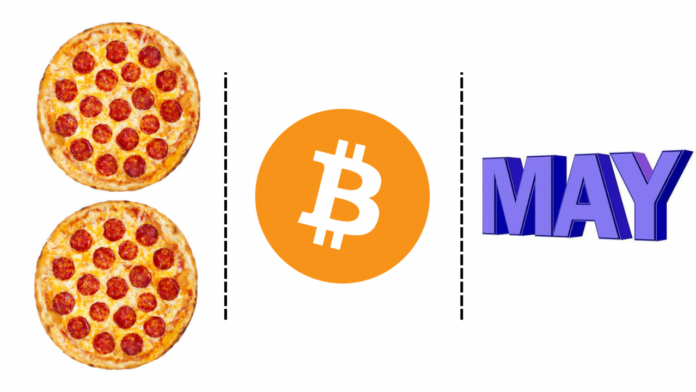 Satoshi Nakamoto, the person who is credited as developing the world’s first and most prominent cryptocurrency – Bitcoin, conceptualised the currency as a peer-to-peer system. A year after the first Bitcoin transaction was made, history was created in May of 2010 when a Florida-based computer programmer tried using Bitcoin as a mode of payment for buying a pizza. The day he purchased the Pizza using Bitcoin is now called Bitcoin Pizza Day.

To start from the beginning, the early Bitcoin miners were rewarded with 50 BTC for each new block they discovered. For those who don’t know, a block reward is a portion of newly minted digital tokens assigned to a user who helps verify transactions on a blockchain protocol. Now, this meant that a person would just need to mine 200 blocks to earn 10,000 BTC. However, compared to nowadays, this wasn’t a difficult aim to achieve as there weren’t many miners available for BTC.

On May 18, 2010, Laszlo Hanyecz, the Computer Programmer based out of Florida, thought of using his bitcoins to buy pizza using 10,000 bitcoins. “I’ll pay 10,000 bitcoins for a couple of pizzas…like maybe 2 large ones so I have some leftover for the next day. I like having leftover pizza to nibble on later,” he wrote on a Bitcoin forum. “If you’re interested, please let me know and we can work out a deal,” he concluded.

At that time, the value of a Bitcoin was so low that a user pointed out that Hanyecz could sell 10,000 of those bitcoins for $41 on a bitcoin exchange. Hanyecz casually replied saying, “I just think it would be interesting if I could say that I paid for a pizza in bitcoins”. While many users even agreed to take up the offer, they originated from different countries and were unsure how the payment would reach them.

Then on May 22, four days after he posted his order of a Pizza, someone on the forum took up his offer. “I just want to report that I successfully traded 10,000 bitcoins for pizza”, Hanyecz wrote on the forum. While the Pizza was made by Papa John’s, Laszlo took it from a 19-year old named Jeremy Sturdivant.

Considering Bitcoin’s all-time of $69,000 in November of 2021, those two pizzas could have cost $690 million dollars (approx Rs 52.7 billion as per today’s value of a dollar). Since then, May 22 is celebrated as the ’Bitcoin Pizza Day’, the day on which two of the most expensive pizzas in the history of mankind were sold.