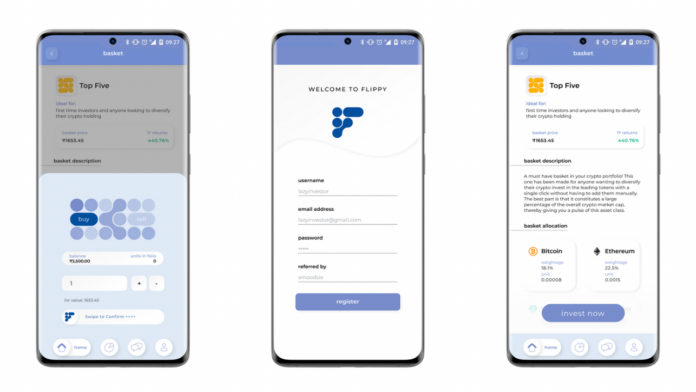 Flippy, a new age social crypto discovery platform dedicated to discovery, investment, entertainment, and diversification in digital assets, today announced the launch of its mobile app in India. The company has raised US $1.15 million in its seed round led by Redstart Labs, a wholly owned subsidiary of InfoEdge, and other key investors including Entrepreneur First, Justin Caldbeck, Alex Lin, and Anirudh Rastogi.

The company has also been backed by a marquee investor- 7 Percent Ventures, an international fund that has invested in unicorns like Oculus VR (later sold to Facebook), SourceDNA (later bought by Apple) and Magic Pony technologies (subsequently sold to Twitter).

Flippy’s app is being used by the users on their waitlist, and will be available on the App Store and Google Play Store soon. The app helps you “discover the world of crypto, follow trusted connections, learn from pros and make responsible investments”, says the company. Flippy allows users to invest through relatable thematic baskets, making diversification possible with a single click.

Users can access a range of informative content through this platform and view investment portfolios of successful crypto-space influencers. Flippy has partnered with leading crypto exchanges such as Bitbns, Krypto and Unocoin, and is in talks with CoinDCX, Zebpay and WazirX to allow users to link their trading accounts and complete their investments from the Flippy platform itself.

“The funds will be used to focus on building a team of junior and senior-level engineering talent to scale flippy’s operations. The second objective is to form a user acquisition strategy and create content that will impart knowledge and make crypto accessible to all investors”, added the company.