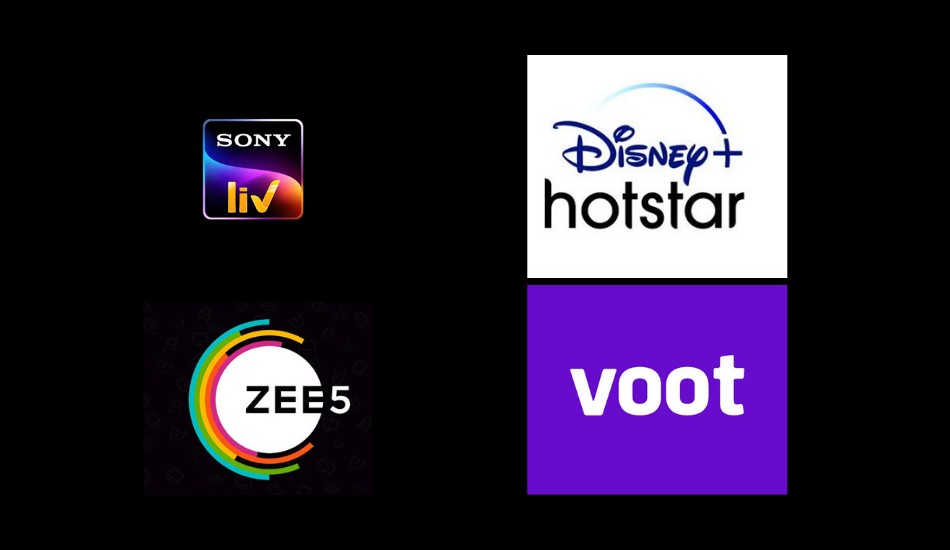 Indian OTT Platforms like SonyLIV, Voot, etc are emerging to be great competitors with the bigger players such as Netflix and Prime Video.

Streaming services like Netflix and Prime Video are currently in their boom period as people are mostly subscribing to their services and watching movies and shows at the comfort of their own homes. While these two are enjoying the business, some of the Indian OTT platforms have also gained a lot of popularity over the past few years and they are competing equally with Netflix and Prime Video today.

Here are the top 5 Indian OTT apps that can help you with your entertainment needs. 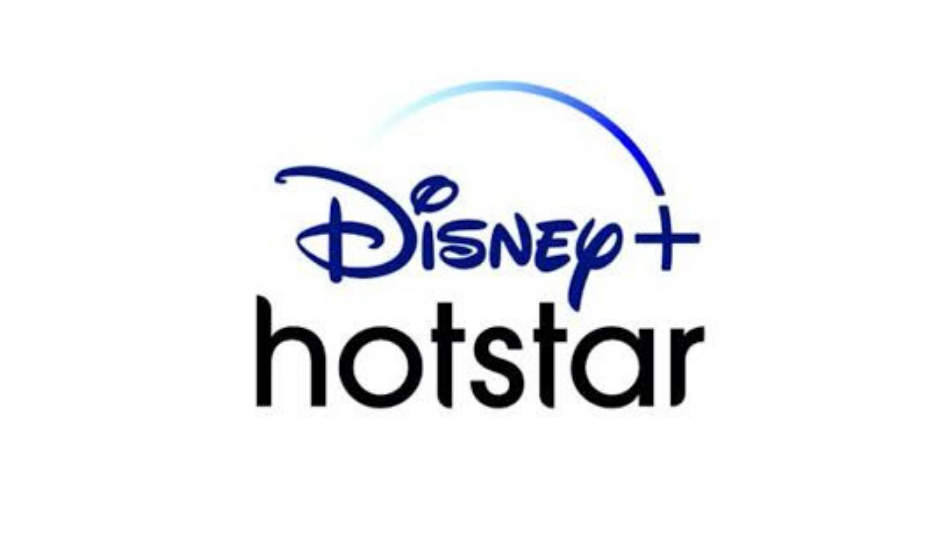 The Home tab shows you recommendations and new releases. The TV tab has a select number of channels and you can watch the content of these channels on the app itself. The Disney+ Tab is basically the best section of the app where original content from Marvel, Disney, etc is all streamed. The sports tab is where the IPL is streamed along with highlights available later after the match has ended. Not only cricket, but the app also does show events related to various other sports like Football, F1 Racing, Esports, Hockey, etc. The News tab live streams news from channels like Aaj Tak, India News, ABP News, etc.

Hotstar has an Android TV app, Apple TV app, Fire TV app, Samsung & LG Smart TV app, and Chromecast support for big-screen viewing. And has apps on iOS and Android platforms too. You can also login to their website for viewing their content.

According to Hotstar, Most of their shows/movies expire after 7 days of download and if you start watching any of these downloaded content, they will expire within 48 hrs. These videos can be downloaded only once. Though, there are no restrictions on the number of times you can download Disney and Hotstar Specials content.

7 multiplex movies out of which 4 are already available on the app, are also exclusive to the Hotstar app. But you will have to buy a subscription to access premium content and these blockbusters. Recently announced, Akshay Kumar’s ‘Laxmmi Bomb’ is making its way on Hotstar on 9th of November.

Hotstar has two subscription plans. The VIP subscription which will cost you Rs 399 for a year and it will let you stream IPL 2020 on your account. It will also give you access to the 7 multiplex movies, Hotstar Specials, and Disney+ Dubbed Movies (not the original English ones). Streaming Quality for the content is restricted to 720p and you can watch only on 1 screen at a time.

The premium subscription on the other hand will cost you Rs 299 for a monthly subscription and Rs 1499 for an annual subscription. This will give you access to all of the Hotstar content American TV Shows, Hollywood movies, Ad-free experience which is not available in the VIP subscription. Streaming Quality is 1080p under this subscription and you can watch on 2 screens simultaneously.

The free subscription gives you access to almost nothing, restricts the quality to 480p and you can watch only on 1 screen at a time.

For the best experience, you must have a subscription for the Hotstar app. 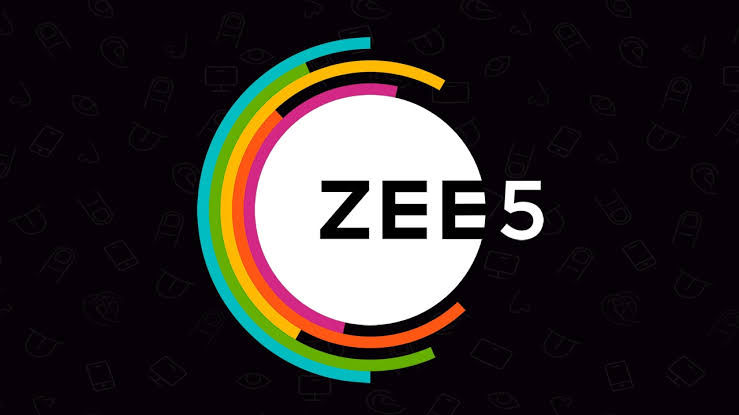 The Zee5 app has more categories on top as it also has the ability to broadcast live channels So it categorises content so you can watch News, Kids content, Music, Live TV, etc. There’s a limited number of live channels available on the app. Same as the Hotstar app, the Home tab here shows recommendations and new releases. The other tabs on the top are pretty self-explanatory.

The Zee5 app is available on the Play Store and iOS platform. You can also view it by logging in to their website.

The Zee5 app has content based across 12 languages, including English, Hindi, Bengali, Malayalam, Tamil, Telugu, Kannada, Marathi, Odiya, Bhojpuri, Gujarati and Punjabi. You also get the option to download free shows and movies. The free shows or movies you download have a validity of 48 hours.

The Zee5 is available has 2 subscription options with total 5 plan options.

It has a Club Membership option where you pay Rs 365 for a yearly subscription, and it will give you access to select content from Zee5, but not all content. You will also get access to TV serials a day early than when they will be broadcasted on TV. It will let you watch Zee5 on 2 devices simultaneously. 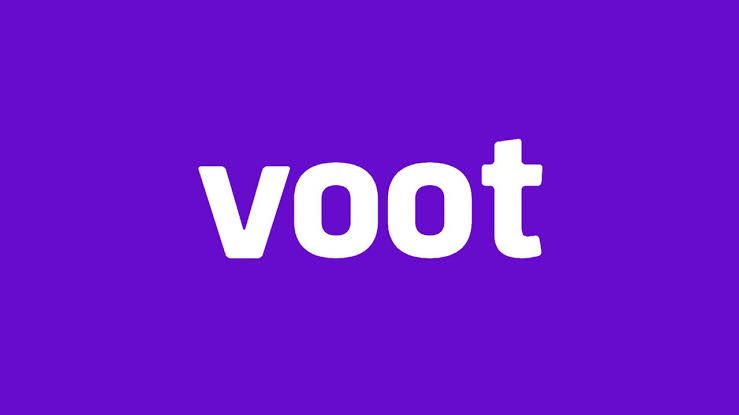 Voot was launched in India back in 2016 and has come a long way since then. The app hosts over 40,000 hours of video content that includes TV shows from channels like MTV, Nickelodeon and Colors. The famous show ‘Bigg Boss’ is streamed on the app for free.

Content is also available in multiple languages like Kannada, Marathi, Bengali, Gujarati, Telugu and Tamil. App has its own subscription called Voot Select which was launched back in February 2020 and has its own exclusive shows like Asur, The Gone Game, etc. 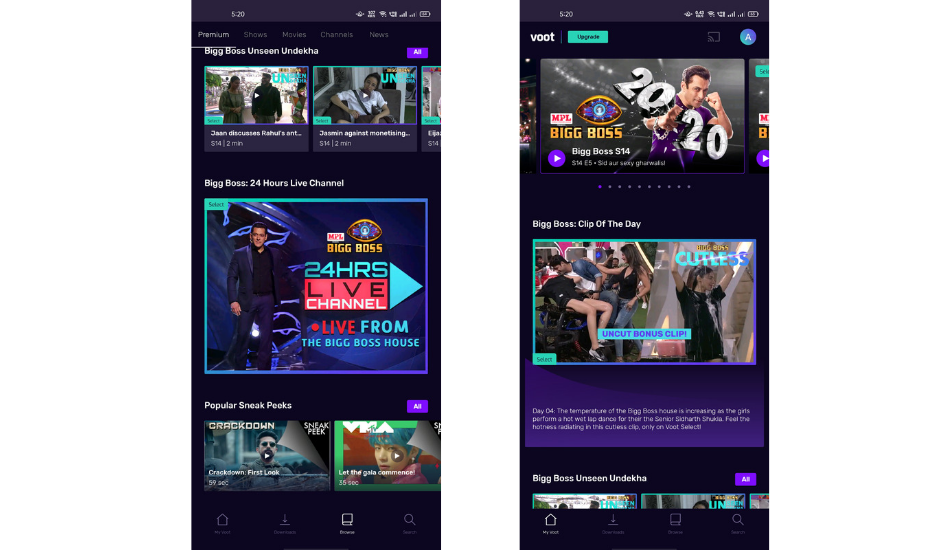 The app also streams international shows like Love Island, Why Women Kill, etc. With the premium subscription, you will be able to watch the 24-hour stream of Bigg Boss from Monday to Friday. You will also get the ability to watch Bigg Boss episodes before it is broadcasted on TVs in weekdays, Ad-Free experience, 45+ live channels, and popular shows 24 hours before TV. There is an annual subscription for Rs 499 and a monthly subscription of Rs 99, both of them will give you the same content.

The UI of the app is pretty simple with 4 Tabs at the bottom. The ‘My Voot’ tab will show you recommendations and trending shows on Voot. The downloads tab will show you your downloaded stuff. The browse tab will have categories like shows, movies, channels and news which are self-explanatory. And with the last tab which is the Search tab, you can search for your favourite show by typing in the name. 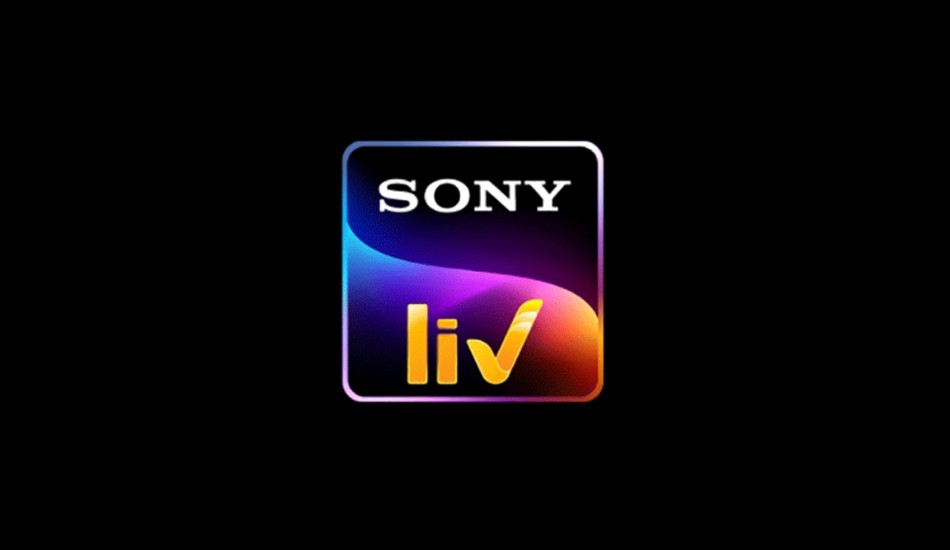 SonyLIV is also an OTT app that provides you with great exclusive shows and shows from all the Sony Channels such as KBC, Tarak Mehta Ka Ooltah Chashma, etc.

It has access to 18 years of content from channels that are part of the Sony Entertainment Network and are included under the channels which translates to more than 700 movies and 40,000+ hours of television show coverage in Hindi, English and Tamil.

The app also streams exclusive shows like the recently launched JL50, Scam 1992, Married Women Diaries, etc. The SonyLIV content is available to watch on their own website, and their app which is available on Android and iOS, FireTV, and it comes pre-installed on Sony’s own Bravia TVs and Smart TVs. The app is also installable on some Samsung Smart TVs.

The app has a pretty similar design as other OTT apps available on Mobile. It has a bottom tab UI where Tabs like Home, Search, My List, Premium, and More are available.

The Home tab shows recommendations and the search tab can help you find your favourite show by typing in the name. You can add shows and movies to your list which you can find later with ease.

The Sony Liv Special plan costs Rs 199 yearly and it comes with benefits such as KBC Play along gold, and access to TV shows at the same time. Subscribers can also download episodes of their favourite shows. Live streaming of sports is not available with this plan. However, you can watch the live preview for up to 10 minutes. Users will also get access to sports highlights with the Sony Liv Special plan. You still get ads with this plan which is a disappointment.

The Liv Special+ Plan costs Rs 399 yearly comes with benefits such as KBC Play along Gold, All TV shows at the same time as TV, and an ad-free experience. No ads will be served except in live linear channels, Games, KBC Play Along, and Sports preview. You still can’t view live sports with this plan.

The Liv Premium Plan comes with Rs 999 yearly subscription, Rs 699 for 6 months and Rs 299 for 1 month. It provides you with all of Liv Special+ features, KBC Play Along Gold, All Live Streaming channels, All Live Sports TV channels and latest international shows. 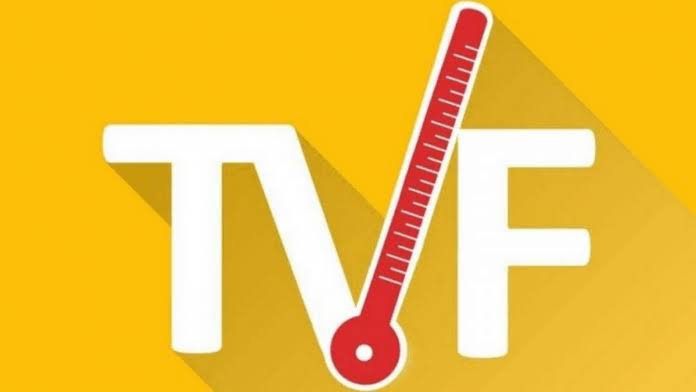 TVF creates its own Web Series, where it launched its first Web Series, called Permanent Roommates back in 2014. Since then, it has launched a bunch of famous web series like Tripling, TVF Pitchers, The Inmates, Humorously Yours, etc. 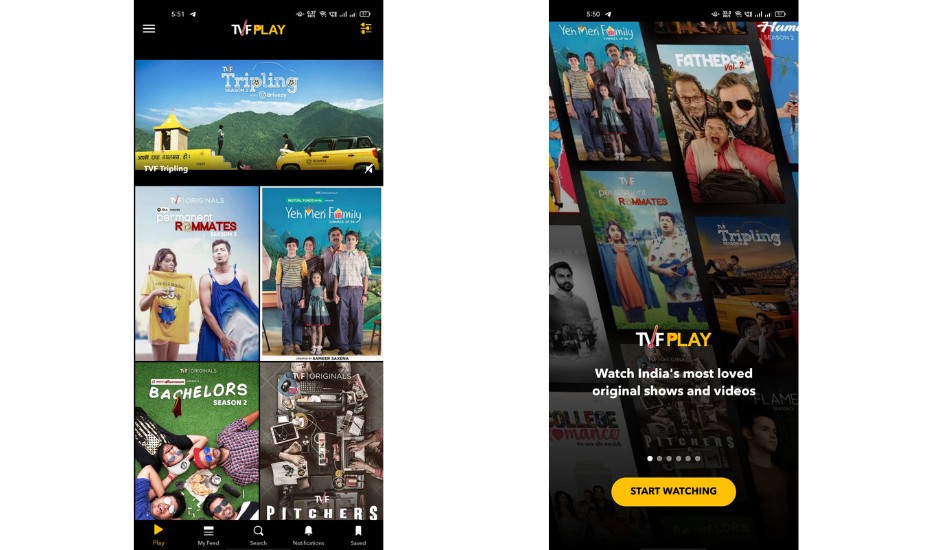 The best part about TVF is that all the content on the app is free to watch. TVF charges you nothing to view their content, no subscriptions required and their app called TVF Play is totally free. The app is available to download on iOS, Android, FireTV and you can login to their website to view their content.