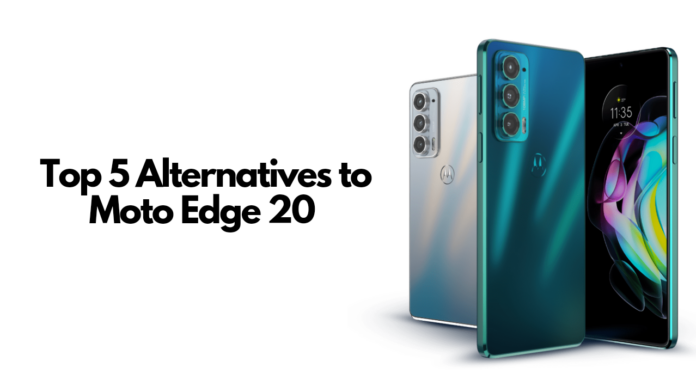 Motorola launched the Moto Edge 20 in India that comes with Qualcomm’s Snapdragon 778G chipset. It has a 6.67-inch 10-bit OLED 144Hz OLED display and packs some decent specifications for the price of Rs 29,999 for a single 8GB + 128GB variant. But this doesn’t mean it won’t face competition from the established players in the market. So here’s a list of top 5 alternatives to the Moto Edge 20 that you can buy right now:

The company is also coming up with regular offers for the smartphone that makes it an even more compelling choice for the price. The iQOO Z3 5G is loaded with a 6.58-inch full HD+ display with a screen resolution of 1080 x 2408 pixels along with 20:9 aspect ratio, 180Hz touch sampling rate, 120Hz refresh rate and HDR10+. Furthermore, the smartphone is powered by the Snapdragon 768G processor along with up to 8GB of RAM. The iQOO Z3 comes with up to 256GB of onboard storage.

In terms of cameras, it comes with a triple-camera setup at the back panel with a combination of a 64-megapixel Samsung ISOCELL GW3 sensor, f/1.79 aperture, an 8-megapixel ultra-wide camera with f/2.2 aperture, and a 2-megapixel depth sensor with f/2.4 aperture. For selfies and video chats, the iQoo Z3 has a 16-megapixel selfie camera sensor at the front with f/2.0 aperture.

Additionally, the iQOO Z3 5G is loaded with a 4400mAh battery with 55W fast charging that can charge the phone up to 50% in 19 minutes and 100% in less than an hour. For security, it sports a side-mounted fingerprint sensor and facial recognition support.

Moreover, the device comes with a “five-layer liquid cooling” system for smooth gaming that reduces the temperature by 10 degrees. It also comes with a 4D haptic feedback system as well.

During our review of the smartphone, we found it to be decent in almost every aspect. In the end, we did say that the smartphone is difficult to beat in its price segment and is worth checking out.

The Realme X7 Max comes in two variants where the 8GB + 128GB model is priced at Rs 24,999 while the 12GB + 256GB variant is priced at Rs 27,999. The phone will be available for purchase in three colour options – Mercury Silver, Asteroid Black, and Milky Way.

This phone by Realme provides flagship level performance but at a much lesser price. You get more RAM and storage along with a much bigger battery and faster charging. Also, as the bigger battery has to handle a 120Hz display, it will give you better battery life compared to a 4000mAh battery handling a 144Hz display on the Moto Edge 20.

The phone is backed by a 4,520mAh battery with 33W fast wired charging support. It sports dual stereo speakers with Dolby Audio and Hi-Res Audio certification. The smartphone runs on Android 11 based on MIUI 12 and also has an IP53 rating. Connectivity options include SA/NSA 5G, Wi-Fi 6, Bluetooth 5.1, NFC, GPS, GLONASS, QZSS, NavIC, Galileo.

The Mi 11X 5G gets you a better processor at the same price. Along with that, you get a bigger battery with slightly faster charging. It is one of the best alternatives to the Moto Edge 20 in our opinion and is worth looking at.

Poco F3 GT packs the MediaTek Dimensity 1200 SoC with up to 8GB of LPDDR4x RAM and up to 256GB of UFS 3.1 storage. The storage is expandable via microSD card. For photos and videos, the phone comes with a triple rear camera setup. It has a 64-megapixel /1.65 aperture primary camera, 8MP ultra-wide camera with f/2.2 aperture, 119° FoV and a 2MP macro camera. For selfies and video calls, the device uses a 16-megapixel shooter.

As for software, the handset runs Android 11 based on MIUI 12.5. Further, there’s a 5,065mAh battery with 67W fast wired charging support. It includes a side-mounted fingerprint scanner for security. The phone also has face recognition as well.

There are a lot of additional features available with the Poco F3 GT. You get retractable triggers called Maglevs. Further, there are dual stereo speakers for a better audio experience along with a larger battery with much faster charging. We feel this one is also out of the toughest alternatives which Moto Edge 20 will have to beat.

OnePlus has committed to provide a better experience with the OnePlus Nord 2 following its merger with Oppo in terms of software. The OnePlus Nord 2 gets you a battery cell which is larger than the one present in Moto Edge 20. Further, it has faster RAM and storage for faster operations.