Can it be the next Flagship Killer and Xiaomi’s knight in shining armour to conqueror the mid-premium segment? Let’s find out.

After all the hype and aggressive marketing campaign, Xiaomi has finally introduced its first flagship device in the Redmi series with the introduction of Redmi K20 Pro. The smartphone is priced at Rs 27,999 for 6GB RAM + 128GB variant and Rs 30,999 for 8GB RAM + 256GB model. It will be available for purchase from Flipkart, Mi.com and Mi Stores starting from 22 July.

The Redmi K20 Pro has a lot of firsts from teh Xiaomi Stable – pop-up selfie camera, new design language, AMOLED display. The company is looking to disrupt the mid-premium segment, which is currently dominated by the likes of OnePlus and Samsung. So, the question here is, can it be Xiaomi’s knight in shining armour to conqueror the mid-premium segment? Let’s find out. 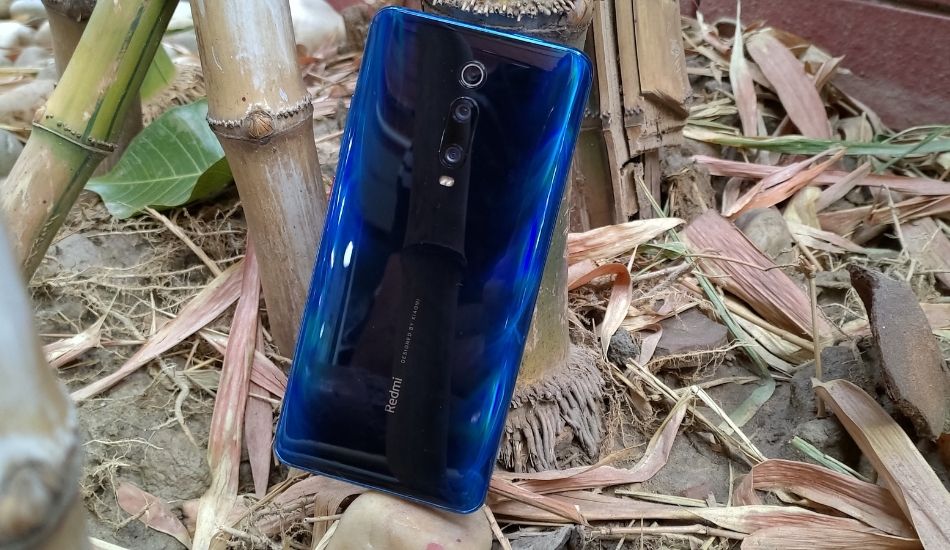 Gone are those days when Xiaomi used to make some standard-looking design for its smartphone range. The company has finally understood the importance of good design and hence, it has finally developed a design texture that looks gorgeous. Redmi K20 Pro features, what Xiaomi calls Aurora Prime Design, which is one of the most distinct-looking gradient finishes we have seen in a smartphone.

The phone is available in three colour option, Flame Red, Glacier Blue and Carbon Black colour options. We got the Glacier Blue colour option for the review and it outright looked premium. The back panel features a black colour in the middle, while the edges feature a blue-coloured pattern that gives a distinctive look when light falls on it. One can see the shade of green, blue and purple with an aurora-like formation that sure looks pleasing to the eyes. 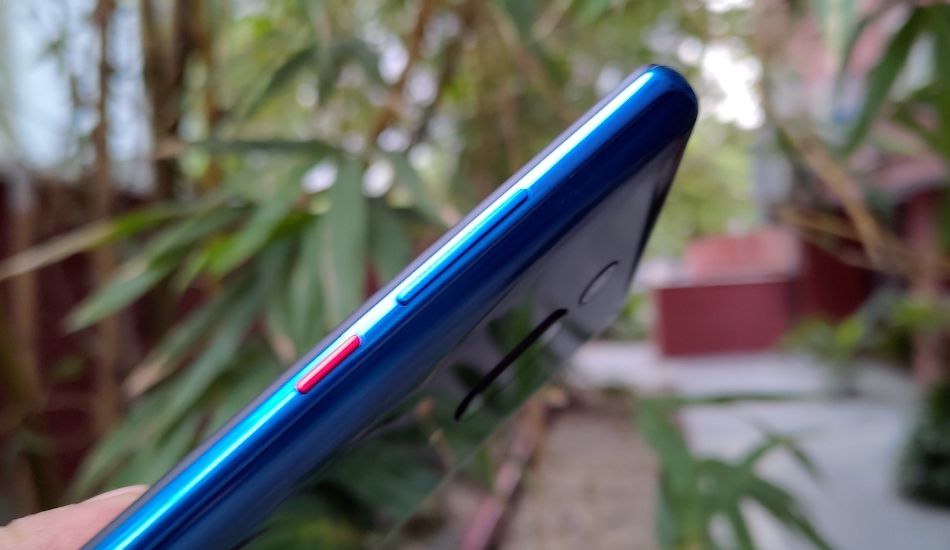 The back is made of glass, which also means that it will attract a lot of smudges, but thankfully, the company is giving you a protective case with the smartphone. The sad reality is that inspite of great design, at the end of the day, one ends up covering it! That said, the smartphone feels solid in hand and curved edges make it easier to hold.

Thankfully, the company is still giving you a 3.5mm audio jack, despite making it slimmer with 8.8mm thickness. It is also the first device from Xiaomi in India to feature a pop-up selfie mechanism. The company has gone one first ahead and added a light on the mechanism, which lit when the camera pop-up or goes down. This is not it, the top of the mechanism also features a light, which brightens up when you charge the device. 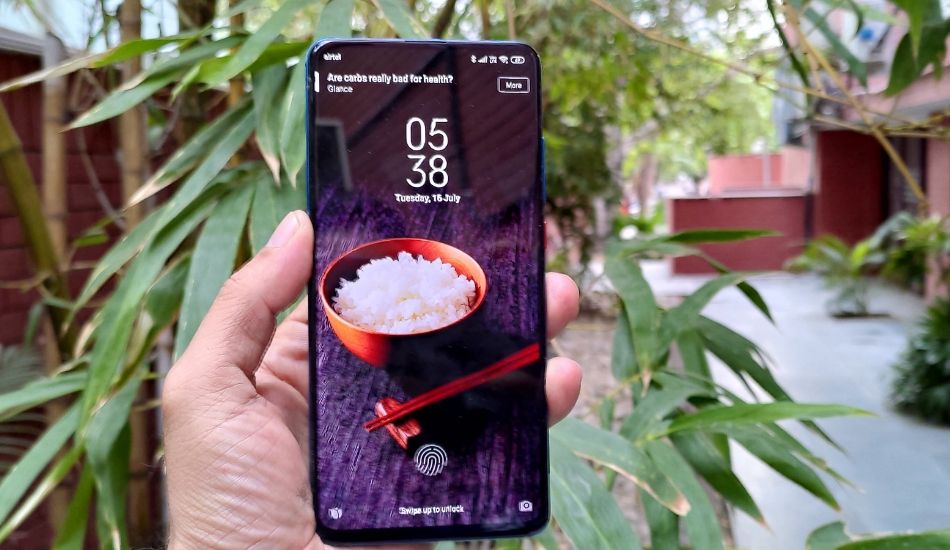 Coming to the display, the Redmi K20 Pro features a 6.39-inch Full HD+ AMOLED Horizon Display with a screen resolution of 2340 x 1080 pixels along with 2.5D Corning Gorilla 5 protection. This is the first device in the Redmi series to feature an AMOLED screen. With the help of pop-up selfie mechanism, the company has managed to give a bezel-less look, which at the end of the day, provides an immersive viewing experience. The display is crisp with deep black and a good level of contrast. Text looks sharp and viewing angles are decent as well. The device also comes with good outdoor visibility as texts are easily readable in daylight condition, all thanks to the 600nits brightness.

The company has added DCI-P3 colour gamut along with DC dimming feature. You also get the option to choose the colour temperature according to your own needs. We also liked the Ambient display feature on the Redmi K20 Pro, which comes with different themes. 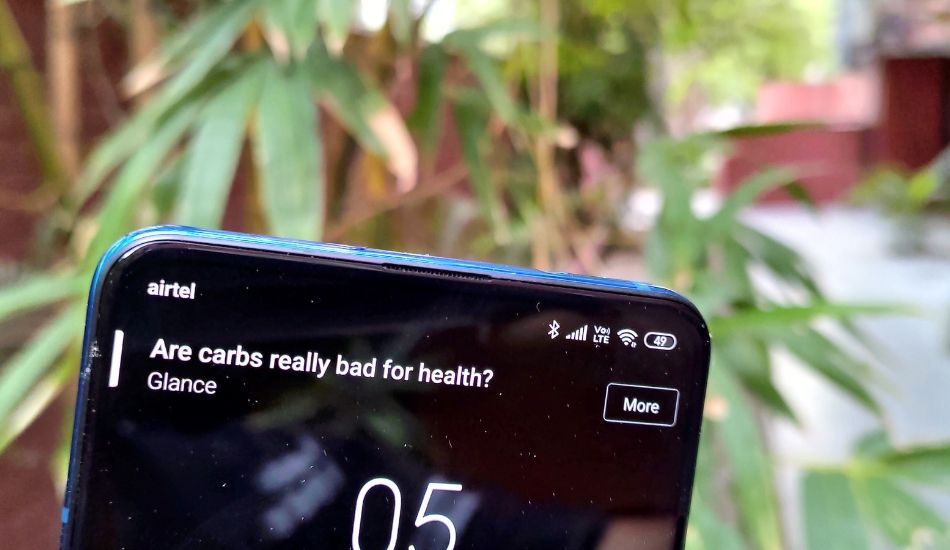 The phone supports Widevine L1 certification, meaning that you can stream HD content on Netflix and Amazon Prime Videos. We watched a couple of episodes of Stranger Things Season 3 on this device and was quite impressed with the viewing experience. The only thing missing here is the 90Hz refresh rate, which would have further refined the whole experience.

Coming to the hardware, the Redmi K20 Pro is powered by the latest Qualcomm Snapdragon 855 processor along with Adreno 640 GPU. The phone is available in two memory options, 6GB RAM + 128GB storage and 8GB RAM + 256GB storage. Sadly, the company has given an option to expand the storage in the Redmi K20 Pro. That said, the performance of the Redmi K20 Pro is quite smooth and you will not face a single lag or stutter during your experience. The app load time is particularly low and multi-tasking is a breeze on this smartphone. 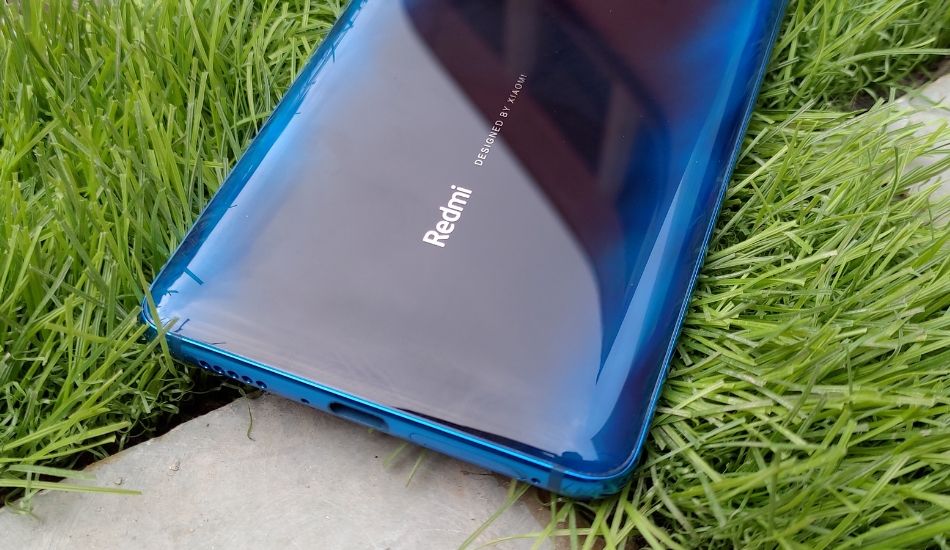 Gaming performance for both casual titles and graphics-intensive games like PUBG Mobile is a smooth experience. One will not see any frame drop or lag even when you put the graphics settings to the highest. The company has added eight layers of graphene, which helps in bringing down the temperature in extended gaming sessions.

The smartphone is also a first in Redmi series to come loaded with an in-display fingerprint sensor. In our testing, we found out that the fingerprint is quite fast to unlock the device. The phone also comes loaded with the face unlock feature, which is also fast. However, we noticed that to activate the feature; one will need first to open the screen lock and swipe-up. It could have been better if the company had given an option to unlock a smartphone by simply clicking on the power on/off button. 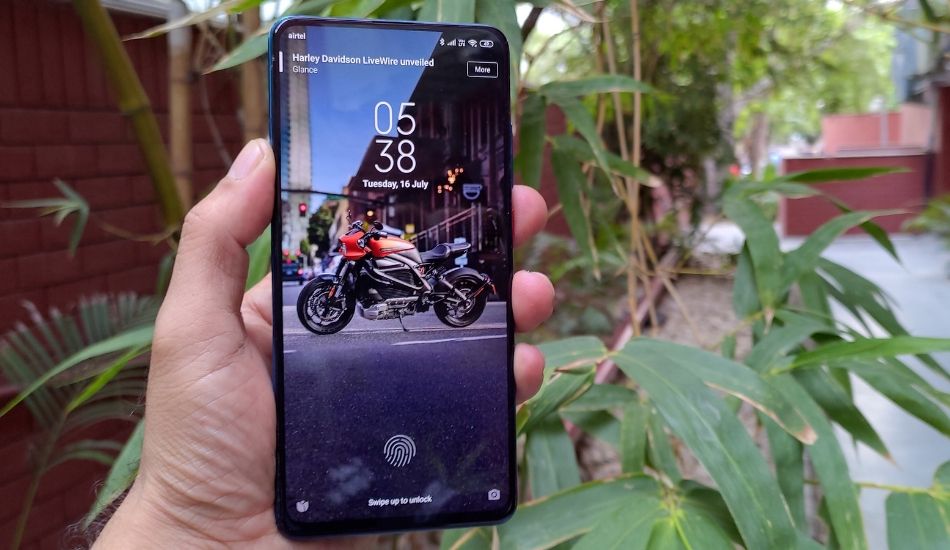 Redmi K20 Pro runs on Android 9.0 Pie, which is based on MIUI 10. Strangely, the company has opted for the Poco Launcher for this smartphone instead of traditional MIUI skin. The Poco Launcher brings app drawer and it is an excellent addition from the company, but it also raises some questions on the future of Poco devices. The user interface is smooth to operate. The addition of app drawer makes your home screen less cluttered and makes it easier to find the applications.

The company has given an option to choose between on-screen navigation buttons and gesture-based controls. Furthermore, when you swipe left from the home screen, you will land on a page that shows Shortcut, utilities, call a cab, displays calendar events and more. Then you have Second space, which creates a second space to store some personal files. Then you dual apps support Enterprise mode and Quick ball. 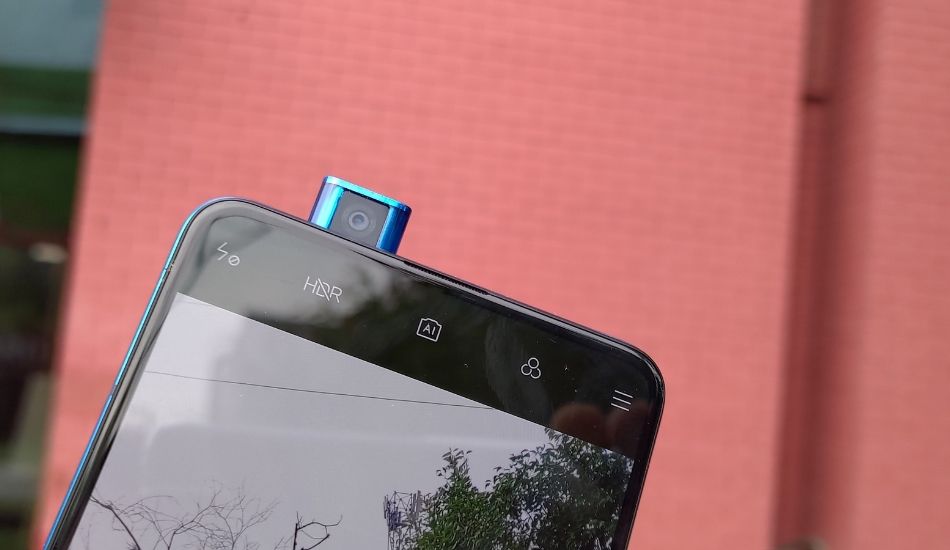 Coming to the cons, the user interface still comes with a host of bloatware. You get company’s apps like Security, Mi Drop, Mi Community, Paytm, Cleaner, Weather, Mi Music, Mi Browser, Mi Store and more. The most frustrating experience came with the Security app, which comes into play whenever you download anything from the play store. In short, whenever one downloads a new app, it will pop-up over your existing window, pinging about how great it is scanning the application. The sad thing here is you cannot disable this application, meaning that you have to either deal with the pop-ups or stop installing any app.

The Redmi K20 Pro features a triple-camera setup. The company has added a 48-megapixel Sony IMX586 sensor as a primary lens with f/1.75 aperture along with a 13-megapixel wide-angle lens (124.8-degree field of view) and an 8-megapixel telephoto lens with 2x zoom. The phone is equipped with a 20-megapixel front-facing camera, which pops up when you need it. It also features PDAF, laser autofocus, EIS for video recording, slow motion and 4K video recording on all three camera modes. 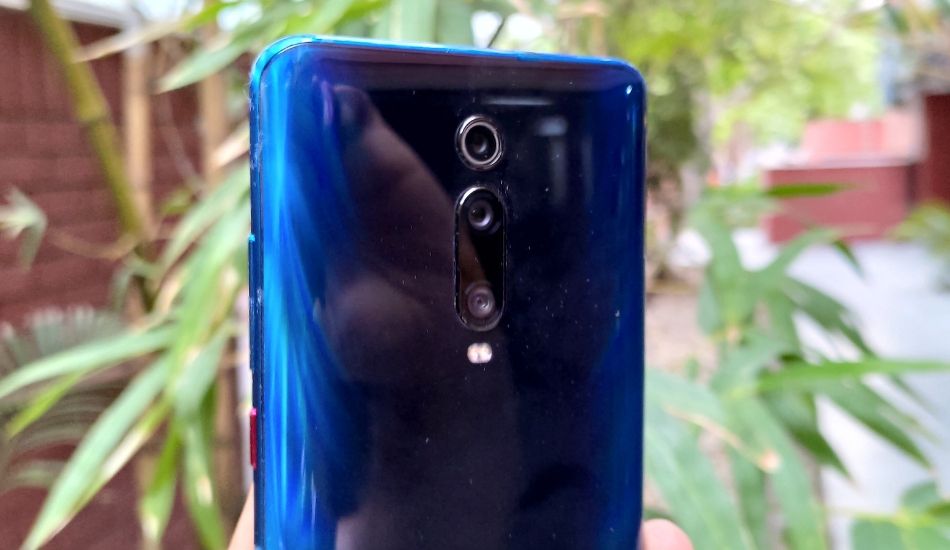 Starting with the camera interface, it is quite easy to use. You get different modes like Pro, Panorama, Night, Portrait, 48M, Photo, Video, Slow motion and Short Video. The company has added AI scene detection, which can be turned off and it has also provided the option to switch between primary, wide-angle and telephoto mode. Coming to the camera performance, the photos clicked in broad daylight came out to be crisp and full of details. The colours were punchy enough and pictures came out with a wide dynamic range. The phone was fast to focus on macro subjects and you get clear shots with colours generally being close to the source.

Using the wide-angle lens, we noticed a slight change of colour tones in the subject, though it was able to capture a larger field of view. Furthermore, there was a slight distortion at the edges. The telephoto lens does a good job of capturing the details. There is also Portrait mode, which uses a telephoto lens. The background blur looked natural in our opinion. 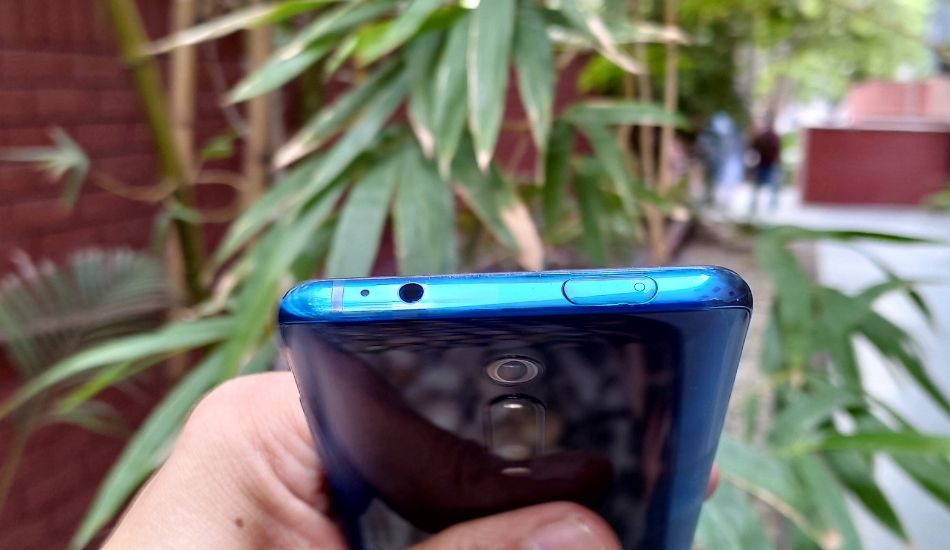 Coming to low light conditions, the smartphone’s performance is satisfactory. Macro shots clicked in the low light scene came out to be decent and colours were close to the source. However, we noticed that the phone was artificially enhancing the low light shots by adding more light to it. The photo clicked in low light were decent enough as there not much noises and grains.

The selfie performance is also quite decent in this smartphone. The photos clicked in broad daylight came out to be good and detail was on point. Furthermore, the low light selfies were average, if not great. The company has also added different modes in Portrait, which are quite fun to explore. 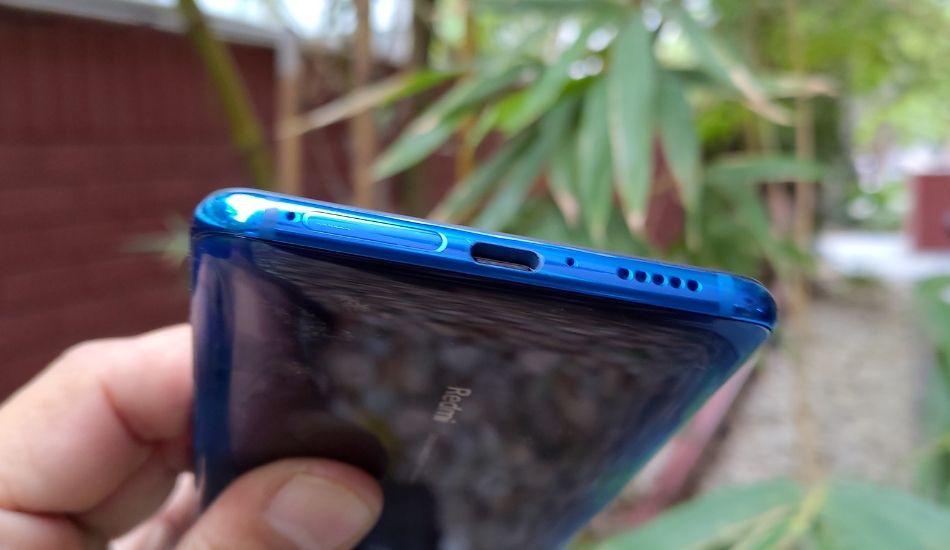 Coming to the battery, a 4000mAh battery backs the Redmi K20 Pro and the company has given a 27W fast charging support. However, the phone comes with an 18W charger bundled with the box and if you need to experience 27W fast charging, you need to buy the charger separately. During our review period, we noticed that the phone lasted for more than one day under normal usage. During heavy usage, which included streaming music, navigating through Google Maps, watching video content, checking emails and playing some games, the phone manages to last till the end of the day.

Coming to the charging speed, it takes almost 2 hours to get fully charged. Apart from this, call connectivity was decent and so was earpiece volume. The K20 Pro supports Hi-Fi audio and speaker volume is decent for a normal-sized room.

The Redmi K20 Pro is an interesting smartphone from Xiaomi. The phone is loaded with a premium design, which stands out from the competition. The display looks crisp with good viewing angles and the hardware performance is top-notch. Software is one area where the company needs to work more, while the cameras are quite decent. The battery is dependable and the audio experience is decent. In nutshell, the Redmi K20 Pro is a hard-to-ignore Flagship Killer from Xiaomi.