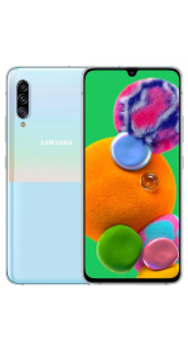 Samsung Galaxy A91 will feature a 6.7-inch Full HD+ Infinity-U display, same as that of the Galaxy A90. On the inside, the Galaxy A91 will be powered by a Qualcomm Snapdragon 855 processor with 8GB of RAM and 128GB of storage. There will be an option to expand the storage with the help of a microSD card to up to 512GB.

For optics, the Galaxy A91 will equip a triple camera setup at the back comprising of a 48-megapixel primary camera with OIS and f/2.0 aperture, 12-megapixel ultra-wide camera and a 5-megapixel depth sensor. There will be a 32-megapixel selfie camera on the front with an f/2.2 aperture.

The smartphone will feature a 4,500mAh, similar to the Galaxy A90 5G but with a faster 45W fast charging solution. Galaxy A91 will run on Android 10 out of the box with Samsung’s One UI interface. Connectivity options include USB-C, WiFi, Bluetooth 5.0 and NFC. The phone is also expected to come with an in-display optical fingerprint scanner.