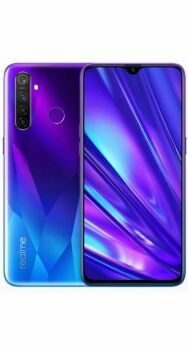 Realme 5 Pro features a 6.3-inch full HD+ display with a screen resolution of 2340 x 1080 pixels with 90.8 per cent screen ratio and Corning Gorilla Glass 3+ protection. Under the hood, the phone is powered by a 2.3GHz Octa-Core Qualcomm Snapdragon 712 processor with Adreno 616 GPU. The phone is available in three memory variants: 4GB RAM + 64GB of internal storage, 6GB RAM + 64GB and 8GB RAM + 128GB of internal storage. The memory can be further expanded up to 256GB via microSD card slot. The phone features a fingerprint sensor at the back and face unlock technology as well.

On the camera front, the phone has a quad rear camera setup. The cameras have a combination of 48-megapixel primary SONY IMX 586 lens with PDAF, f/1.8 aperture, a 119-degree 8-megapixel wide-angle lens with f/2.25 aperture, a 2-megapixel macro lens with f/2.4 aperture and a 2-megapixel depth sensor with f/2.4 aperture, all of which is enabled with EIS Image Stabilisation and Quad Bayer pixel four-in-one technology. For the front, the company has added a 16-megapixel Sony IMX471 AI front camera with f/2.0 aperture and AI beautification mode. The front camera is also supported with EIS Image Stabilization out of the box.

Realme 5 Pro runs on Android 9 Pie operating system based on ColorOS 6.0 UI and it is backed up by a 4035mAh battery which supports VOOC 3.0 Flash Charge technology. Connectivity features include 4G VoLTE, Bluetooth 5.0, Wi-Fi, GPS, GLONASS, Type C port and dual-SIM support. The phone measures 157 x 74.2 x 8.9mm and weighs 184 grams. As for the sensors are concerned, it comes with proximity, gravity, gyro, accelerometer and light sensors.