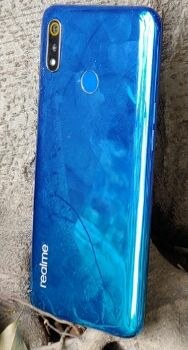 The Realme 3 features a 6.2-inch HD+ (1520 x 720 pixels) display with an aspect ratio of 19:9. Phone display has 450 nits peak brightness and comes with Corning Gorilla Glass protection. The Realme 3 is powered by a MediaTek Helio P70 2.1GHz octa-core processor along with Mali G72 GPU coupled with 3GB of RAM and 32GB of internal storage, which can be further expandable up to 256GB through MicroSD card. The phone is backed up by a by a 4,230mAh Li-ion battery and also features a fingerprint sensor at the back. There is also an AI Face Unlock feature.

Realme 3 comes with a dual-camera setup consisting of 13-megapixel primary sensor with an f/1.8 aperture and a 2-megapixel secondary sensor, coupled with an LED flash. For the front, there is a 13-megapixel sensor with f/2.0 aperture, 1.12-micron pixels. The smartphone runs on Android 9.0 Pie, with ColorOS 6.0 top of it. On the connectivity front, the phone supports Bluetooth 4.2, 4G LTE, GPS, Wifi, GLONASS, micro USB port and 3.5mm audio jack. Sensors include Accelerometer, E-compass, Gravity sensor, fingerprint sensor, light and proximity sensor. It measures 156.1×75.6×8.3mm and weighs 175 grams.