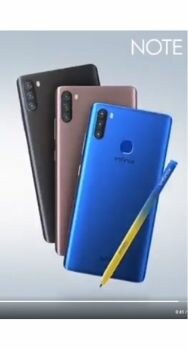 Infinix Note 6 has a 6-inch FullView AMOLED display along with 2.5D curved glass. The phone comes equipped with 2.3 GHz MediaTek P35 Octa-core processor along with PowerVR GE8320 GPU. It has 4GB RAM and 64GB of internal storage with an option to expand the storage up to 256GB via Micro SD card. The Infinix Note 6 comes packed with ARCore feature, which is Google’s platform for building augmented reality experiences. It also houses a modified and upgraded X-Pen, which performs better as compared to its predecessor.

On the camera front, the Note 6 houses a triple rear camera module with 16-megapixel as the primary sensor, an  8-megapixel wide angle lens and a 2-megapixel depth sensor with Dual LED Flash. For the front, it has a 16-megapixel AI selfie sensor. The phone has a fingerprint scanner at the back panel for security.

The smartphone runs on Android 9 Pie operating system with XOS 5.0 Cheetah running on top of it and gets its juice from a non-removable 4,000mAh battery, which the company claims can to last up to 3 days on a single charge. Connectivity options include VoLTE, Wi-Fi, BlueTooth 5.0, 3.5mm headphone jack, GPS with A-GPS and Micro USB port.