Here's a list of top 10 addictive mobile games that you can get hooked on to! 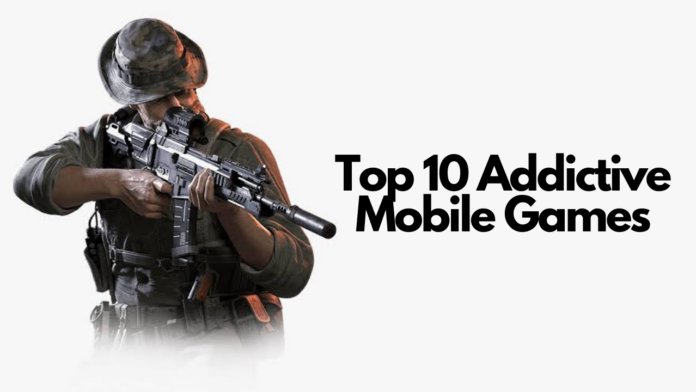 Smartphones went beyond just being a machine for phone calling long back. They have now become a gaming machine in the palm of your hands and developers have been creating fun and addictive ones for a long time. So here’s a list of top 10 addictive mobile games (well, you have been warned) we curated out of the thousands available on the App Store and Play Store that should keep you hooked to your mobiles:

Available both on iOS and Android, Call Of Duty Mobile comes from Activision who has been creating a franchise of the title since 2003. The game gained enough popularity shortly after its release for mobile phones in October 2019. It came at a time when PUBG Mobile was already doing well all over the world.

The game gets almost all of its features from PUBG Mobile, including a Battle Royale mode, Multiplayer mode, a newly released Zombie mode and more. The battle royale mode starts with 100 players jumping out of a plane, and the last one standing wins. Multiplayer mode gets various other modes within itself, including Team Deathmatch, Domination, and many more.

The zombie mode came out just last week, where you survive waves of zombies arriving one after another after a short period of time. The game has been super addictive so far for me, and it’s even more fun when you play it with your friends. The game works best with high graphics and fps that would require you a mid-range to high-end phone.

Second, on our list of top 10 addictive mobile games comes Battlegrounds Mobile India. The game was released as an Indian variant of PUBG Mobile, which got banned in India back in September of 2020. With this version, you get most of the features back from the original PUBG Mobile.

The game is similar to Call Of Duty Mobile when it comes to gameplay, but the graphics and many other features differ from others. The most appealing part of the game I have come across so far? You can drive a Tesla in the game.

Bullet Echo comes from the makers of the famous game ‘Cut the Rope’ that you might have heard of. It was released back in 2020 by Zeptolab as a PvP tactical team shooter game. It even came in the list of the top games of 2020 on the Play Store. As a basic idea for the gameplay, your vision is limited by a flashlight beam, but you can hear enemies’ steps and shots. Finally, you kill them and the last team standing wins the game.

You unlock various ‘heroes’ that come with different weapons, including shotgun, sniper, and assault rifle. In addition, the player picks up items along the way, such as bullets and various attachments for the gun your hero has. Then there are various game modes to choose from, such as Battle Royale with 5 teams on the map, solo vs solo, and Team vs Team.

The game even has an official discord server so you can join in with other players and strategize your gameplay. In addition, you can add your friends to the mix for even more fun. The game runs smooth so far on even lower-end mobile phones and an addictive gameplay is guaranteed.

Fourth on our list of top addictive mobile games is Clash Royale. The game has been created by Supercell and has been present since 2016. You guessed it right, Supercell is also behind the famous title Clash Of Clans, which has over 500 million downloads.

You can already figure that the game developer from Finland develops great games be it of any genre. Talking about Clash Royale, though, it is a real-time, head-to-head battle game set in the Clash Universe. Do note that you need an active internet connection at all times to play the game. An unstable internet connection can really mess up the 3-minute match for you.

You collect and upgrade dozens of cards featuring the Clash of Clans troops, spells, and defences in the game. You go head to head with another player on the other end. The one who wins gets the gold, the trophies and different types of chests. These chests contain different cards for the troops. The troop gets upgraded to the next level with more damage and health when you get enough of them.

There are different modes available, including 2v2 where a teammate joins you and you go head-to-head with another team. However, the rest of the gameplay remains identical as 1v1. I played the game for 1 and a half years before I had to leave it because it became too addictive. And there’s your proof why it’s present in our list.

This game by developer ‘Codigames’ is purely for when boredom kicks in. I have played the game and it comes with a decent graphics quality. The main idea is to upgrade your hotel and various other aspects of it using money.

You may wait to get more money from the services you create for your customers, or you can watch an ad. Yes, it is an ad-based game, so you watch ads to gain money. But, at a certain point, the game gives you so much money by watching an ad that it becomes too appealing to watch it.

The ads are maximum of 30 seconds in length and it’s not compulsory to watch them. The developers created over a dozen more games with a similar basic idea but an entirely different concept. The Hotel Empire Tycoon was the most addictive one out of those as per my liking.

A real-time multiplayer game from ‘Not Doppler’, as the name suggests, involves cars. To be precise, over 70 different vehicles spread across 4 different rarities. The primary goal is to collect as many crowns as possible before getting destroyed.

You will have to collect power-ups, destroy other players, steal their crowns, and climb the leaderboards. Of course, your friends can also join in for an extra bit of fun. Single player mode is available as well. The developers are continuously updating the game for more content.

Made by Thomas K Young, Dadish is about a Dad who’s also a Radish and his kids have now gone missing. The kids went missing from the vegetable patch and Dadish (A Dad and a Radish) will now have to go through fast-food themed foes to reunite with its children.

In doing so, guess who’s help Dadish needs? You. The game has pleasant-looking sceneries and some funny dialogues to make the game amusing at the same time. The controls may take a bit of time to get used to, but it gets super fun once you are familiar with them. The game has a sequel as well, where the same story takes place but with a different set of enemies and much more engaging levels. Both of them have been amongst the top addictive games I have played on mobile.

Data Wing was released back in 2017 and hasn’t been updated since with more levels. But the amount of work that has been put into the game is amazing. It is set in a neon landscape and is a story-driven racing adventure.

Data Wings deliver critical data throughout the computer system, following Mother’s orders without question. But when the system comes under attack, and Mother becomes irrational, one of the Data Wings decides to do something about it.

It has a +2 hour story with over 40 levels with two-touch controls. It has a concept of sleek racing with a focus on ricocheting off walls.

This one is for all the football fans out there. The game beats FIFA in terms of graphics, in my opinion, when it comes to the mobile version. However, it’s a large game in size, so you would need approximately 2GB of space free on your phone.

The game also has a variety of officially licensed clubs from the upper echelons of European soccer, including FC Barcelona, Manchester United, Juventus, FC Bayern München, and new exclusive partner, AS Roma. It’s a classic football game where you play against another player or campaign matches as well.

Developed by the developer ‘Tapcheer’, Hot Slide comes as a PvP drift racing game at 99MB. You can collect and upgrade cars, take on solo and team challenges, win in one-on-one duels and get to the top position of worldwide league.

There’s a collection of more than 30 unique cars across Muscle, Streetcars, Supercars or Off-Road SUVs. The game controls are super simple, unique and it doesn’t take much time to get used to them. You’ll be playing the races with your thumb and against a real player.

So this was our list of the top 10 addictive mobile games. Let us know if you think we missed an even more addictive game than the ones mentioned above.