Here’s our first look at the Galaxy Watch 5 series. 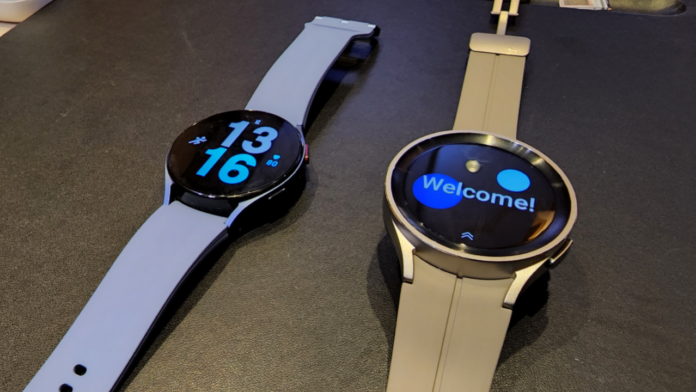 Samsung, at its Galaxy Unpacked event today, unveiled the all-new foldables but thats not all, as the company also went ahead and gave us new watches as well, including the Galaxy Watch 5 and the Watch 5 Pro. These are the successors to last year’s Galaxy Watch 4 series. Here’s our first look at Galaxy Watch 5 series:

Samsung has now removed the rotating dial from the watch which helped users scroll through the UI in Galaxy Watch classic models. Instead, just like the regular model, the Watch 5 Pro also has a software-based rotating dial where one can now rotate their finger around the edges of the display itself to scroll through the UI. Moreover, Samsung is using Sapphire Crystal Glass, second hardest mineral after diamond, on all the models of Watch 5 series for better protection of the display.

Both the Watches are running on the Google’s WearOS based OneUI 4.5 software. Both of them pack the same chip as last generation Watch 4 models, and that’s the Exynos W920 chip. While this chip has been smooth on the Galaxy Watch 4 series, we will have to test it on the Watch 5 series before claiming the same for it.

Both the models under the Watch 5 series pack bigger batteries than last year’s Galaxy Watch 4 series. This means the Watches should last longer than the previous gen models about which a lot of users complained that they couldn’t get past a day of usage. Moreover, the Watch 5 models now charge at 10W instead of 5W charging found on Watch 4 models.