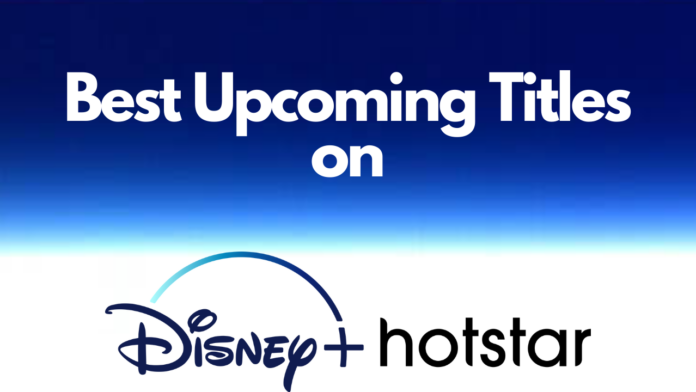 Disney+ Hotstar has gained a lot of fame in the recent past for its successful exclusive series and movies. Marvel has contributed a major part towards the success of the platform with series like WandaVision, Falcon and the Winter Soldier, and a recent one called Loki. Marvel has a huge fan base and Hotstar has obviously taken advantage of that. Not only these, but Hotstar also has a few more shows and movies in the pipeline. So here are the top upcoming movies and series on Disney+ Hotstar:

1
If These Walls Could Sing

If these walls could sing is Disney+ Original documentary about the history of Abbey Road Studios in London and the experiences and memories of the musicians who have played there. The series is coming to the platform on December 16.

2
Pentatonix: Around the World for the Holidays

This series follows the acapella group Pentatonix as they struggle to find inspiration for their annual holiday album, and to make things worse, their misguided manager mistakenly locks them in a magic mailroom. The series will come to Disney+ Hotstar on December 2.

3
Percy Jackson And The Olympians

Percy Jackson and the Olympians is an upcoming American television series for the streaming service Disney+, based on the novel series of the same name by Rick Riordan. It follows the story of a 12-year-old demigod Percy Jackson who is accused by the Greek god Zeus of stealing his lightning bolt.

4
The Guardians of the Galaxy Holiday Special

The Guardians of the Galaxy Holiday Special is spin-off series where the Guardians, who are on a mission to make Christmas unforgettable for Quill, head to Earth in search of the perfect present. The series will begin streaming on Disney+ Hotstar from November 25.

Streaming on Disney+ Hotstar from November 25, The Hip Hop Nutcracker is about Maria-Clara who embark on a holiday adventure to bring her parents back together. Along the way, she finds help from the magical toymaker, Drosselmeyer, and the Nutcracker, whom she brings to life.

An unlikely group of heroes set off on a dangerous quest to places far beyond their home, where they must face their inner demons and come together to save their world. The season 1 of Willow will stream on Disney+ starting November 30.

7
Save our Squad with David Beckham

The series follows Beckham returning to the East London football pitches where he played as a child. He will mentor a young grassroots side, struggling to survive in the league. The series is coming to Disney+ Hotstar on November 9.

8
Mickey: The story of a Mouse

An original series The Santa Clauses will be streaming on Disney+ Hotstar from November 16. The series is about Scott Calvin who is on the brink of his 65th birthday and realizing that he can’t be Santa forever; Scott sets out to find a suitable replacement Santa while preparing his family for a new adventure in a life south of the pole.

Dottie McStuffins is an animated series where McStuffins puts on her stethoscope and starts fixing toys and dolls, as she wants to become a doctor like her mother. The series will stream on Disney+ Hotstar from August 26.

She-Hulk is an upcoming series from Marvel Studios that will consist of 10 episodes and is set for release on August 17, 2022. It revolves around the story of lawyer Jennifer Walters, cousin of Bruce Banner, who inherits her Hulk powers after she receives a blood transfusion from him. The difference between herself and her cousin, is that she is able to retain most of her personality, intelligence, and emotional control even after she transforms into the Hulk.

Disenchanted is the sequel to the 2007 movie enchanted and revolves around Giselle, who after her ten years of happily ever after, questions her happiness, inadvertently turning the lives of those in the real world and Andalasia upside down in the process. The musical film is set for release on November 18, 2022.

This one is a series exploring the incredible wildlife of America’s most iconic national parks. The season 1 of this docuseries will stream from August 31 on Disney+ Hotstar.

Eureka! is about a young inventor who designs contraptions in hopes of making the world a better place and moving her prehistoric community into a more modern era. The Season 1 of this animated show will come to Disney+ Hotstar on August 24 where Episodes 1, 2, 3 and 4 will be available to stream at first.