ZTE V0840 with Nougat pays a visit to Geekbench

ZTE has recently launched Blade A7 Plus in Russia and Australia. Now the company seems to be working on a new smartphone which is named as ZTE V0840. The ZTE V0840 has been spotted on a GeekBench benchmarking website. The listing on GeekBench revealed some key specifications of the ZTE’s upcoming device.

In the GeekBench listing, the ZTE V0840 got 661 points in single-core test and in muli-core test it received 1831 points. As per the listing on Geekbench, the ZTE V0840 has 3GB RAM and Qualcomm Snapdragon 425 1.40 GHz quad-core processor. The handset is based on the Android 7.1.1 Nougat operating system. 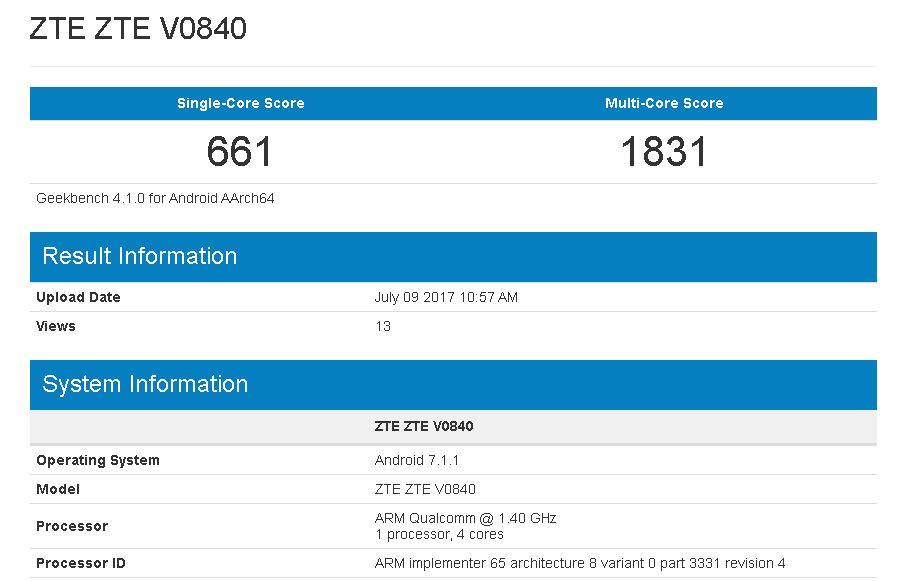 The ZTE V0840 was also spotted on TENAA certification website some time back with dual rear camera setup. As per the listing, the ZTE V0840 features a 5-inch display with HD resolution. It will be powered by a 1.4GHz quad-core processor coupled with 2GB, 3GB, and 4GB of RAM options along with 16GB and 32GB storage variants. One of the rear cameras is 8-megapixel which is accompanied by a 5-megapixel front camera. The smartphone is backed by a 2500mAh battery and it will run on Android Nougat 7.1.1 operating system.

To recall specs of recently launched ZTE Blade V7 Plus, it features a 5.2-inch Full HD 2.5D Gorilla Glass display with a resolution of 1920×1080 pixels and is powered by a 2.0GHz octa-core MediaTek MT6753 processor 64-bit processor. It comes with 2GB of RAM and 16GB of internal storage, which can be further expandable up to 128GB via microSD card. It runs on an older Android 6.0 Marshmallow operating system and also houses a fingerprint scanner as well, which sits on its back panel.