The Nubia phone will be featuring 13-megapixel autofocus camera and a LED flash in its rear panel.

The ZTE Nubia NX907J which was earlier spotted on TENNA certification website has now been spotted on GFXBench benchmarking website. The GFX listing confirms the specs which we have seen in the earlier listing except for memory storage and operating system.

As per the listing on GFXBench, Nubia NX907J has a 9.2-inch display that has HD (1280×720 pixels) resolution and 5 finger gesture support. We don’t expect such a high screen size for the device and it may just be a typo error since the TENAA listing revealed the device will be featuring 5.5 inch HD display. Besides as per the listing, it has Qualcomm Snapdragon 4.30 1.4GHz octa-core processor with Adreno 505 GPU. The smartphone has 3GB RAM with 32GB internal storage out of which 22GB is reserved for users. The Nubia NX907J runs on Android 7.1.1 Nougat operating system. In the listing, there is no information about its battery or expandable memory. 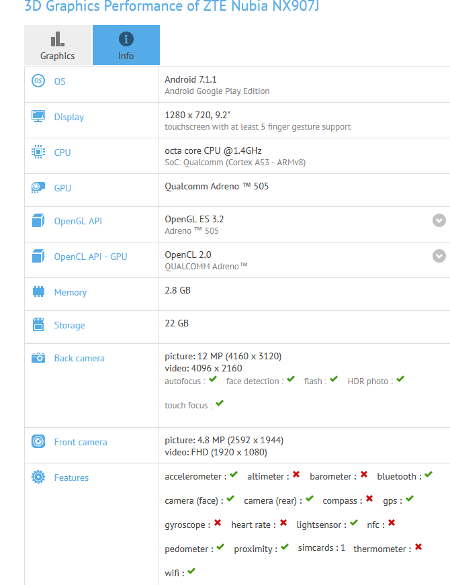 Further, the Nubia phone is listed with 13-megapixel autofocus camera and a LED flash in its rear panel. There is a 5-megapixel camera in its front for selfies. The GFX listing shows that the device has connectivity features like Bluetooth, GPS and WiFi. As per the listing, the device has an accelerometer, light sensor and proximity sensor as well.

As per the earlier TENAA listing, Nubia NX907J features a 5.5-inch display that has HD display with 1280 x 720 pixel resolution. It is powered by a 1.4 GHz octa-core processor which is coupled with 2GB RAM. It offers 16GB of internal storage, 128 GB expandable storage via a micro SD card, rear camera of a 13-megapixel and 5-megapixel front-facing camera. It runs on Android 6.0.1 Marshmallow operating system and is fueled by 2900 mAh battery. Connectivity options of the smartphone include 4G-LTE with VoLTE, Bluetooth, WiFi, GPS/A-GPS and a micro USB port. The dimensions of the phone are 155.3 x 77.2 x 7.95 mm and it weighs 163 grams.

There is no information about the pricing and availability of the device as yet, however, given the fact that it has been spotted TENAA as well as GFX, it will not be much long before we see some new leaks revealing the pricing as well. So we request you to stay updated on our website for the same.

Note – The lead image is for the repsentational purpose only.